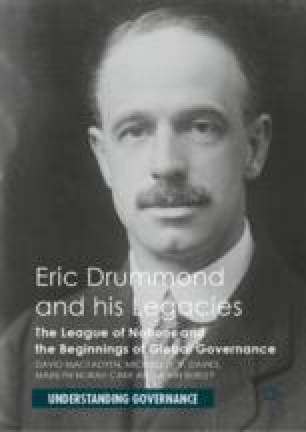 Describes his unsuccessful initiative to persuade Monnet to succeed him at the League. His high reputation in 1933 was eroding while representing British policy as Ambassador in Rome to a Fascist leader who regarded the League as a ‘tottering temple’. Drummond’s role in Anglo-Italian relations is re-appraised and he is credited with negotiating a pact that helped keep Italy out of Hitler’s war for a year. During the Second World War, back in the UK, he maintained contact with League staff and advised economist Alexander Loveday on the move of members of the Secretariat to the USA. During the dissolution of the League and the creation of the UN, Drummond was ignored, to emphasize a break from the past.