The Art and Science of Seismic Interpretation 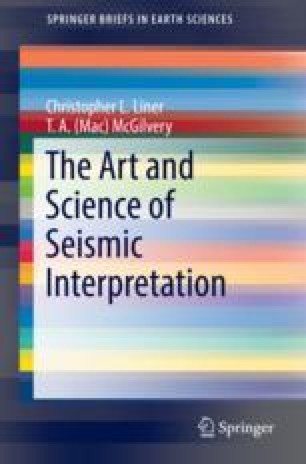 Geophysics is used to estimate subsurface geology and rock properties from measurement of gravity, electromagnetic, and seismic fields at the earth’s surface. The seismic data set was intially developed as 2D tool to image subsurface structure and trap geometry. It has evolved into a 3D tool with application to all aspects of the petroleum system. Its current use is expanding to include characterization of the geomechanical properties of traget horizons in unconventional plays. Reflection seismic data, in particular, has evolved from crude beginnings in the early 1900s to the primary imaging technology used in the modern search for hydrocarbons. The process of seismic migration operates on field data to image geological features and form prestack image gathers containing data variability with respect to time, offset, and azimuth at discrete “bin” locations throughout a survey area. Routinely, the image gathers are summed to form post stack data suitable for 3D seismic interpretation of horizons, faults, attributes, and geobodies. Image gathers may also be directly interpreted or analyzed for indicators of lithology, pore fluid, and fractures or inverted with well and core data to estimate elastic properties of hydrocarbon reservoirs, source rocks, and seals.