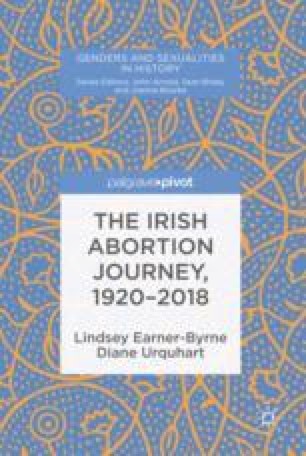 The introduction of the Abortion Act of 1967 in Britain had significant impact on the lives of women on the island of Ireland who could, and did, travel for legal and safe abortions. However, it also facilitated Ireland’s continued evasion of complex issues related to pregnancy, thus forcing women to seek solutions to their unwanted, unsafe or unviable pregnancies beyond the moral gaze of both states. While there were significant differences in each state’s handling of these issues, in both cases the policy decisions made in relation to abortion were not woman-centred and were often driven by highly organised conservative forces adept at using politics for ideological purposes. This chapter analyses the moral dynamics of both states exploring the nuances that differentiated them and the cultural forces that made them so similar. It argues that geography and politics were essential to the sustained and successful opposition to abortion in both jurisdictions: they could both export the abortion issue and use women’s bodies for political ends.