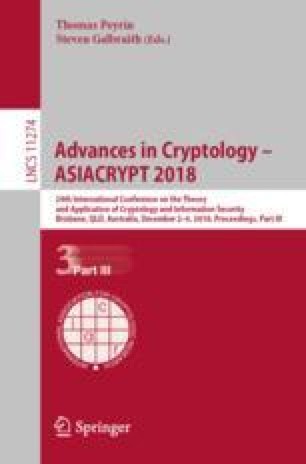 The notion of non-interactive secure computation (NISC) first introduced in the work of Ishai et al. [EUROCRYPT 2011] studies the following problem: Suppose a receiver R wishes to publish an encryption of her secret input y so that any sender S with input x can then send a message m that reveals f(x, y) to R (for some function f). Here, m can be viewed as an encryption of f(x, y) that can be decrypted by R. NISC requires security against both malicious senders and receivers, and also requires the receiver’s message to be reusable across multiple computations (w.r.t. a fixed input of the receiver).

All previous solutions to this problem necessarily rely upon OT (or specific number-theoretic assumptions) even in the common reference string model or the random oracle model or to achieve weaker notions of security such as super-polynomial-time simulation.

In this work, we construct a NISC protocol based on the minimal assumption of one way functions, in the stateless hardware token model. Our construction achieves UC security and requires a single token sent by the receiver to the sender.

I. Visconti—Research supported in part by the European Union’s Horizon 2020 research and innovation programme under grant agreement No. 780477 (project PRIViLEDGE) and in part by University of Salerno through a FARB grant. 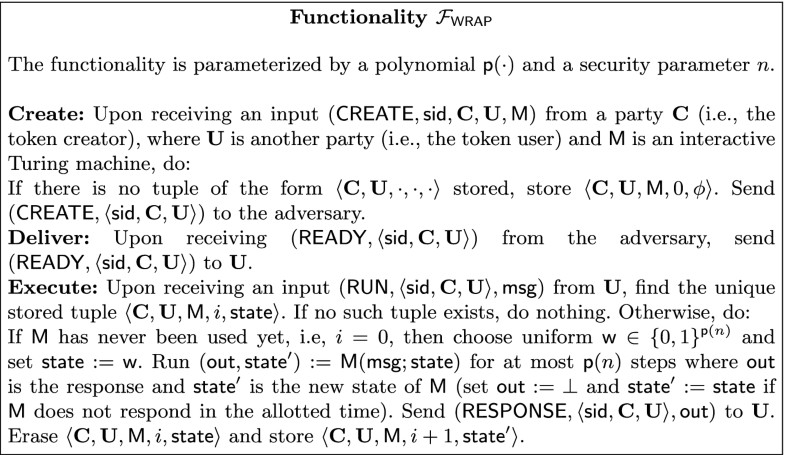 A UC Framework and Ideal Functionalities

For simplicity, we define the two-party protocol syntax, and then informally review the two-party UC-framework, which can be extended to the multi-party case. For more details, see [6].

Protocol syntax. Following [22], a protocol is represented as a system of probabilistic interactive Turing machines (ITMs), where each ITM represents the program to be run within a different party. Specifically, the input and output tapes model inputs and outputs that are received from and given to other programs running on the same machine, and the communication tapes model messages sent to and received from the network. Adversarial entities are also modeled as ITMs.

The Ideal Token Functionality. We now describe the ideal token functionality. Note that our ideal functionality models stateful tokens. Although all our protocols use stateless tokens, an adversarially generated token may be stateful.