Wildlife between Empire and Nation in Twentieth-Century Africa 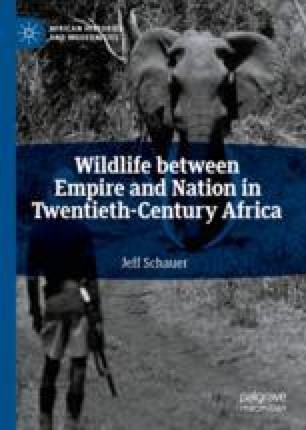 This chapter explores the emergence of an imperial wildlife preservation lobby comprised of former hunters, liberal reformers, and imperialists. As the British Empire conquered southern, central, and eastern Africa in the late nineteenth century, wresting control over the management of land and animals from indigenous authorities, this lobby, in the form of the Society for the Preservation of the Fauna of the Empire (founded 1903) argued for a universal, empire-wide approach to protecting animals, regulating hunting, creating a new category of poachers, and relying on imperial agents and natural historians to publicize their cause. Preservationists leveraged their connections to Britain’s imperial government to gain a monopoly on imperial wildlife policymaking, but complained by the 1920s that their influence was waning.

African Wildlife huntingHunting African Trip Lobengula populationsPopulation
These keywords were added by machine and not by the authors. This process is experimental and the keywords may be updated as the learning algorithm improves.
This is a preview of subscription content, log in to check access.