A Reader’s Companion to The Prince, Leviathan, and the Second Treatise 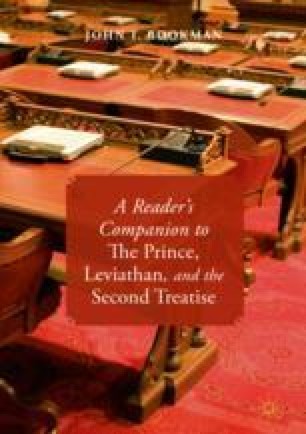 A Reader’s Companion to The Prince, Leviathan, and the Second Treatise pp 65-137 | Cite as

On his own account, Hobbes was preoccupied with living a secure life. Fear of violent death informs all that he wrote about politics. In the absence of strong government, he contended, men and women would be in constant fear of their lives. In that belief, he argued for the establishment of absolute sovereignty, preferably in the form of absolute monarchy, and he defended such government against claims of limits upon it. Civil war, he thought, begins in such claims, and civil war is the greatest misfortune that can befall a people.

Among the many questions taken up in the bibliographical essay are the coherence of Hobbes’s explanation of the establishment of the sovereign, the relationship between his political and moral philosophy and his metaphysics and epistemology, and the function he accords religion and the church in Leviathan. A bibliography of over 200 entries identifies the volumes published in the Clarendon edition of Hobbes’s works, which will supersede Molesworth as the standard. It also lists the many collections of commentary as well as monographs and articles.