The Theoretic Life - A Classical Ideal and its Modern Fate 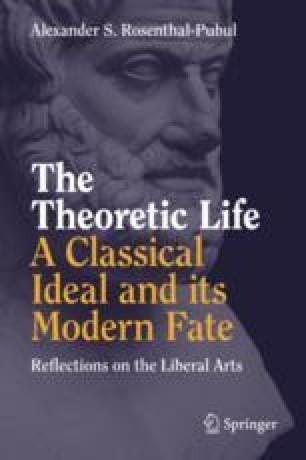 The Classical Ideal of High Culture in the Democratic Age

One of the elements which has rendered the classics and their ideal of “liberal culture” most questionable to the modern age is the rise of democratic-egalitarianism. In a democratic age the historic association of the classical ideals with “elitism” is deemed a decisive argument against them. In spite of the Greek origins of democracy, it is certainly fair to describe Greek culture as having an “aristocratic” tincture. Its central value was excellence, not equality and it believed in demanding standards of achievement. The classically rooted idea of the liberal as against the “servile” or “mechanical” arts was predicated on the notion of activities proper to the leisure of the “free” gentleman and an aristocratic denigration of labor, trade, and commerce. In more modern times is also the historical association of European high culture with aristocratic patronage. The egalitarian ideal (pace Nietzsche) seems to have roots not in the classical world but in Christianity with its proclamation of the equal dignity of all, and indeed its preferential concern for the poor, weak, and marginalized – an ideal which subsequently appeared also in secularized forms unmoored from its religious roots. Whereas Nietzsche viewed this as negative, we must acknowledge its moral fertility in the struggle for the dignity of laborers and indeed ultimately the abolition of slavery and other forms of oppression. Nonetheless, the applied to the sphere of culture, egalitarianism has a levelling effect destructive of high culture. An urgent task then is how to reconcile the worthy values in moral egalitarianism, with the “inegalitarianism” required for the existence of cultural standards.