Terrorism in the Classroom 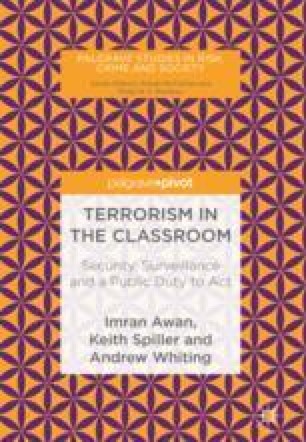 Terrorism in the Classroom pp 1-5 | Cite as

The threat of terrorism has seen the implementation and development of new counter-terrorism strategies across the globe. The events of September 11, 2001, heralded the starting point of the ongoing Global War on Terror, and despite almost two decades having passed since then, further attacks that have targeted Western nations in particular have seen the continued expansion of counter-terrorism legislation. In the UK a notable contemporary example of this expansion has been the Counter-Terrorism and Security Act (2015) that has seen various different aspects of the public sector having a statutory requirement placed upon them to pay ‘due regard to the need to prevent people from being drawn into terrorism’ (HM Government, Prevent duty guidance. Available at https://www.legislation.gov.uk/ukdsi/2015/9780111133309/pdfs/ukdsiod_9780111133309_en.pdf, 2015: 5). Passed into law in 2015, this duty has also become a core component of the government’s latest iteration of the flagship CONTEST strategy. One such area affected by this statutory duty is UK education, and it is this coming together of counter-terrorism and education that is the focus of our book. In this introduction we sketch out the background and importance of these events, explain our motivations and objectives, and lay out the book’s structure to explain what each chapter will achieve.