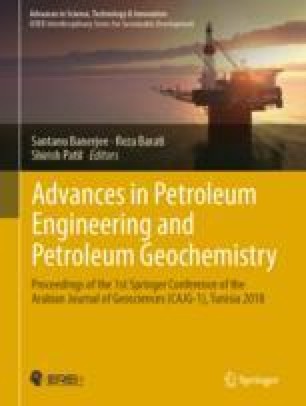 The geological landscape in Northern Tunisia is dominated by its diapiric structures that started its ascending movements since the late Triassic to Early Cretaceous. This movement is driven by a mechanism known as Halokinesis. The main objective of this study is to establish the relationship between the salt structure setting and the maturity of the surrounding source rocks especially the Cenomanian-Turonian Bahloul Fr. In order to assess the maturity history of the source rock, we analyzed several black shale samples from around Jebal Ech cheid by means of Rock Eval pyrolysis and GC/MS. Our results demonstrate a total organic Carbon (TOC) percentage of 1–9% and a Tmax maturity between 424 and 445 °C. In addition, the distributions of the source rock biomarkers saturated as well as aromatic, change in a specific trend of increasing maturity from the SW to the NE of the structure. This change is also proven when using GC/MS technique to analyze the saturated and aromatic biomarkers such as Ts/Ts+Tm ratios, 22S/22S+22r values for C31 homohopanes, and 20S/(20S+20R) ratios for C29. The results from Rock Eval and GC/MS analyses demonstrate that the salt structure played a role in modifying the geothermal gradient of the basin and in the maturity of the source rock in Bahloul Fr., the individualization of subsidence and deep-seated faults are the main reasons behind the maturity contrast between the studied zones. The organic matter has reached different stages of thermal maturity with a general increasing maturity trend (SW to NE).