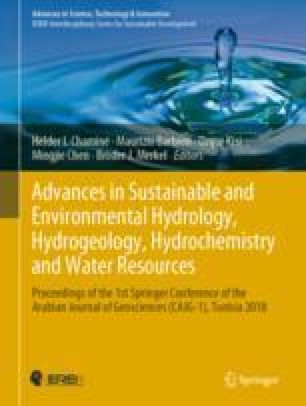 Several studies have documented the general characteristics of fluoride in groundwater, like the fluoridated area must have the presence of crystalline basement rocks/volcanic bedrocks that contain most of the fluoride-containing minerals. Fluoride comes to groundwater through an anion exchange or the dissolution of minerals. The fluoride accumulation further promoted by calcium (Ca2+) deficient sodium (Na+)—bicarbonate (\({{{\text{HCO}}_{3}}^{ - }}\)) type groundwater, long residence time of groundwater, strong evapo-transpiration in a semi-arid/arid climate [1, 4, 7]. But very few studies have documented [2] the influence of hydraulic properties (water level, hydraulic conductivity) on the behavior of fluoride in groundwater. Therefore, this study is conducted only for fifteen years water level and F− concentration data to understand the effect of water level fluctuation on fluoride occurrence and its behaviour in the aquifer. Hydraulic conductivity of the aquifer is also considered to get an idea about the fracture network and its influence on F− concentration.

The study area (Maheshwaram watershed) is situated in the Ranga Reddy district of Telangana, at a distance of about 35 km from Hyderabad. The watershed has an area of 53 km2. The study area is situated between longitude 78° 24′ 30″E–78° 29′ 00″E and latitude 17° 06′ 20″N–17° 11′ 00″N. The laminated saprolite and the fissured layer together form the two-tier aquifer system in this region and they coexist almost in the entire area [6]. The methodologies of groundwater level and sample collection from the field and the analysis of groundwater samples for fluoride are discussed in detail in Chatterjee et al. [3]. Hydraulic conductivities (in meter/second) are obtained by a slug test in the study area [5]. The graphs were prepared in Microsoft excel 2007 (Fig. 1).

It is seen from the graph (Fig. 2) that F− concentration was either 1.5 or below 1.5 mg/l most of the time, at locations W19 and W16 (located around the recharge area or at a high elevation). Whereas, at locations W6 and W2 (located around the discharge area or at a low elevation), most of the time, F− concentrations were above 1.5 mg/l. However, the location W11, which falls in between the recharge and discharge area, has F− concentration below or above 1.5 mg/l in a proportional way. The water level ranges from 5 to 30 m, 5 to 27 m and 7 to 24 m at locations W19 and W16, W6 and W2, and W11, respectively, within the time period of 2003–2017. The water level fluctuation, ∆h (difference between pre and post-monsoon water level) and the fluctuation of F− concentration, ∆F (difference between pre and post-monsoon water level) were plotted (Fig. 3) to understand the influence of increase or decrease of water level on F− concentration. Most of the samples show a positive relation between ∆h and ∆F, which indicates that fluoride is released into groundwater through the rock-water interaction and it generally decreases due to the dilution after the increase of water level.
Moreover, the relations between the hydraulic conductivity (K) of the aquifer, the average ∆h and average ∆F (Table 1) show that, near the discharge area, K values are high with higher ∆h and ∆F values. This reflects the fact that, if fracture connectivity is good, then during monsoon there will be high recharge into the aquifer which leads to high ∆h (as groundwater usage depends on availability) and high recharge dilutes fluoride concentration in groundwater which leads to high ∆F.
Table 1