Joint Preservation of the Knee 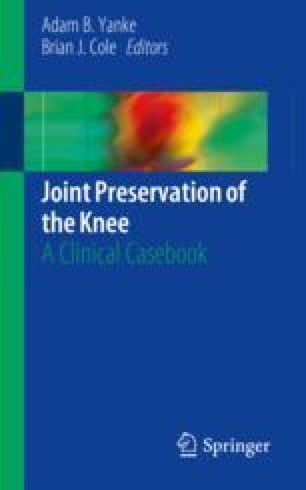 Focal chondral defects are often identified in the knee either using advanced imaging techniques or at the time of arthroscopy. Many patients with cartilage lesions experience symptoms of pain, clicking, or swelling; however, others remain asymptomatic. The clinical decision of how to manage a chondral defect is often difficult and must be correlated with a patient’s clinical presentation. Additionally, it is critical to weigh the risks and benefits of potential treatments, such as cost, rehabilitation protocol, potential adverse effects, and long-term outcomes when deciding to address a chondral defect. Here we present a case and supporting evidence for the treatment of a 21-year-old male undergoing an anterior cruciate ligament reconstruction with an incidental medial femoral condyle lesion.

A 21-year-old male presents 18 months after a noncontact, twisting injury of the right knee. He has no prior history of knee injury and no symptoms prior to this event. At the time of injury, he had difficulty bearing weight and developed significant swelling within 24 h of the event. He never received a formal evaluation, but complained of inability to return to sport and high-level exercise several months after the injury. He denies experiencing any obvious instability events since the time of injury, but reports a severe lack of confidence in his injured knee. He had complaints of anterior knee pain with stairs and some occasional swelling, but no primary pain symptoms.

The patient is 6 feet and 0 inches tall, weighs 174 pounds, and walks with a non-antalgic gait. There is no coronal plane abnormality when walking or standing. His range of motion is from −5° to 135° in his right knee, which is equal to his uninjured left knee. At the time of exam, he has a Grade I effusion and no medial or lateral joint line tenderness. Ligamentous examination reveals a 2B Lachman, negative posterior drawer, negative varus and valgus stress tests, and normal dial test.

Radiographs of the right knee were obtained showing no fracture or dislocation as well as preserved joint space without evidence of tibiofemoral arthritis (Fig. 6.1). Review of his right knee magnetic resonance imaging (MRI) demonstrates a complete rupture of the ACL with an intact posterior cruciate ligament (PCL), medial collateral ligament (MCL), and lateral collateral ligament (LCL). The patellofemoral and lateral compartments appear normal. There is a posterior medial meniscus tear that appears chronic in nature. There is a focal, full-thickness chondral defect of the posterior medial femoral condyle with underlying subchondral edema (Fig. 6.2).

The lateral meniscal tear was mildly debrided with a shaver, and a medial meniscectomy was performed to treat the chronic medial meniscal tear. The medial femoral condyle defect was gently debrided to a stable base using a shaver to remove loose cartilage fragments. The decision was made to refrain from performing a formal cartilage restoration procedure at that time.

Chondral defects of the knee are common within the general population, with one series reporting an incidence of 63% in patients undergoing arthroscopy [1]. The weight-bearing aspect of the medial femoral condyle has been identified as the most common location for such defects, although they are also often observed on the lateral femoral condyle and within the patellofemoral compartment [1]. Cartilage lesions frequently cause symptoms, including localized pain, swelling, and functional disability, yet many defects remain asymptomatic and are only identified on advanced imaging or during arthroscopy while investigating the concurrent pathology. The association of symptomatic chondral defects with coronal malalignment, meniscus deficiency, or subchondral bone disease is often identifiable from a patient’s history or imaging findings. Far less is understood, however, about the natural history of asymptomatic, incidental lesions that exist in the knee.

Whether symptomatic or asymptomatic, the decision-making process when treating any chondral defect is multifactorial and must take into consideration the defect’s characteristics, such as the depth, size, location, and involvement of subchondral bone, in addition to patient-specific factors, which include varus or valgus malalignment, prior cartilage procedures, and concomitant meniscal or ligamentous pathology [2]. Depending on these factors, cartilage defects themselves may be successfully treated using a variety of methods ranging from a simple chondroplasty to more invasive cartilage restoration methods, including marrow stimulation, osteochondral grafting, and cell-based treatments. Symptomatic lesions are unlikely to improve without appropriate intervention, but when asymptomatic lesions are discovered, it is critical to weigh the risks and benefits of each treatment option.

While the outcomes of various cartilage restoration procedures for the treatment of symptomatic cartilage lesions have been reported [3, 4, 5, 6], few studies have reported on the outcomes of asymptomatic lesions that are left untreated at the time of surgery. Shelbourne and colleagues investigated whether the presence of an untreated articular cartilage defect at the time of an ACL reconstruction would have impacted the outcome [7]. The authors compared the results of 125 ACL reconstruction patients with asymptomatic chondral defects treated with debridement to a control group of patients undergoing ACL with intact cartilage. While the final follow-up data was only available for approximately 20% of patients, they found that patients with intact cartilage had a significantly higher modified Noyes score (95.3 vs. 94.0) but demonstrated no difference in radiographic knee findings. Additionally, at least 79% of patients in both groups were able to return to sport. Despite the low follow-up percentage seen in this study, the results suggest that the presence of an asymptomatic chondral defect does not significantly impact the outcome of patients undergoing ACL reconstruction [7].

Similarly, Widuchowski and colleagues compared patients with untreated, asymptomatic Grade III and Grade IV chondral defects undergoing ACL reconstruction to patients with intact cartilage undergoing ACL reconstruction [8]. At 15-year follow-up, they reported that there was no difference between the defect and control group with the International Knee Documentation Committee (IKDC), Lysholm, and Tegner scores. Additionally, there was no difference in tibial anterior translation or reoperation rates between the two groups [8]. In agreement with the study by Shelbourne and colleagues, this study further supports that invasive cartilage restoration techniques should not be used to treat incidental chondral defects.

Chondroplasty has also been shown to provide relief in patients with symptomatic chondral defects. Hubbard compared the outcomes of patients with symptomatic defects of the medial femoral condyle who received either an arthroscopic debridement or washout and found that 80% of patients receiving a chondroplasty were pain-free at 1-year follow-up, compared to only 14% of patients in the washout group [9]. Additionally, Scillia et al. reported that 67% of National Football League players were able to return to play after arthroscopic chondroplasty , while those who also underwent a microfracture were 4.4 times less likely to return to play [10]. Messner and Maletius reported the long-term outcomes of 28 athletes with high-grade chondral damage in the weight-bearing aspect of the knee treated with arthroscopic chondroplasty [11]. Only 5 patients required further surgical intervention, and 21 patients were able return to their presurgical activity level [11]. More recently, Anderson et al. reported on a group of patients undergoing chondroplasty for symptomatic chondral defects in the absence of concurrent pathology [12]. Their cohort experienced symptomatic improvement at a mean follow-up of 31.5 months, and lower-grade lesions were correlated with greater improvement in patient-reported outcome scores [12]. Patients with patellofemoral cartilage lesions, in particular, often experience symptomatic relief after arthroscopic debridement. Federico and Reider reported outcomes of 36 patients undergoing debridement of symptomatic Grades II–IV patellar lesions for the treatment of anterior knee pain [13]. Overall, their cohort showed significant improvement in Fulkerson-Shea Patellofemoral Joint Evaluation score at final follow-up, and all but four patients stated that they benefited from the procedure [13].

When discovering an incidental chondral defect, it is important to consider the other factors associated with more invasive cartilage restoration procedures, such as wait times, costs, and postoperative rehabilitation. Autologous chondrocyte implantation (ACI) and osteochondral allograft transplantation (OCA) both require a future surgical procedure given that time is required to culture the chondrocytes in the case of ACI and acquire the allograft in the case of OCA. This exposes patients to additional general anesthesia and financial burdens associated with surgery. Microfracture and osteochondral autograft transplantation (OAT) can be performed without subsequent surgery; however, each of these procedures has its own limitations and requires significant postoperative rehabilitation. OAT requires the harvest of an osteochondral plug from a healthy region of the knee and comes with the risk of donor site morbidity, which increases with the number of plugs used [14]. Microfracture has been associated with worsening outcomes after 2-year postoperative time point and a high incidence of persistent postoperative pain [15]. Marrow stimulation can also lead to worsening pain as well as the formation of intraosseous osteophytes. Additionally, patients undergoing microfracture or OAT are instructed to be non-weight-bearing for 6 weeks, which can lead to muscular atrophy and persistent stiffness if not appropriately rehabilitated. Though not a determining factor in itself, the planned debridement approach can also avoid the uncertainty associated with what postoperative protocol the patient will be following. Arguably the worst-case scenario is a clinician deciding to perform marrow stimulation during a procedure for an incidental defect without prior discussion with the patient of the possibility as well as the changes in postoperative protocol.

Incidental chondral defects create a difficult clinical scenario and are commonly identified while evaluating for and treating the concurrent pathology. It is critical to determine whether the patient is experiencing any pain, swelling, or mechanical symptoms related to the identified defect. This can even involve them testing the knee before treating other associated pathologies (running in a linear fashion before performing ACL reconstruction). If symptomatic, intervention may be necessary; however, asymptomatic defects often remain asymptomatic and do not interfere with a patient’s outcome. In the setting of an asymptomatic cartilage lesion while treating the concurrent pathology, the authors recommend mechanical debridement to avoid sequelae of unnecessary, more invasive intervention.