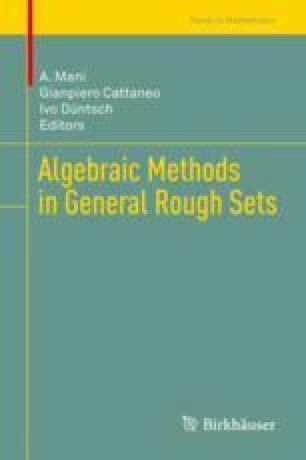 Chapter
Part of the Trends in Mathematics book series (TM)

In what follows the reader will find an exposition of the basic, albeit not elementary, connections between Rough Set Theory and relation algebra, topology and algebraic logic.

Many algebraic aspects of Rough Set Theory, are known nowadays. Other are less known, although they are important, for instance because they unveil the “epistemological meaning” of some “unexplained” mathematical features of well-known algebraic structures.

We shall wrap everything in a simple exposition, illustrated by many examples, where just a few basic notions are required. Some new results will help the connection of the topics taken into account.

Relation algebra provides basic tools for the definition of approximations in general (that is, not confined to particular kind of relations). Indeed, these tools lead to pairs of operators fulfilling Galois adjointness, whose combinations, in turn, provide pre-topological and topological operators, which, in some cases, turn into approximation operators.

Once one has approximation operators, rough sets can be defined. In turn, rough set systems can be made into different logico-algebraic systems, such as Nelson algebras, three-valued Łukasiewicz algebras, Post algebras of order three, Heyting and co-Heyting algebras.

In addition, in the process of approximation, one has to deal with both exact and inexact pieces of information (definable and non-definable sets). Therefore, the concept of local validity comes into picture. It will be extensively discussed because it links the construction of Nelson algebras from Heyting ones with the notions of a Grothendieck topology and a Lawvere-Tierney operator.

As a side effect, we obtain an information-oriented explanation of the above logico-algebraic constructions which usually are given on the basis of pure formal motivations.

The exposition will move from abstract levels (pointless) to concrete levels of analysis.