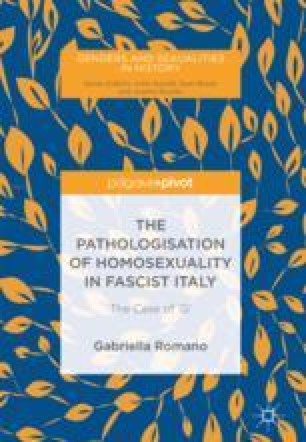 “My Untamed, Alone, Naked Will”: Freedom

This chapter sheds light on the last part of G.’s internment and tries to explain why he was released. It is based on archival evidence found in the Racconigi asylum, where he was sent for a second psychiatric assessment. The chapter further sketches G.’s personality, as it emerged from this last series of events and from his writings, and draws a hypothesis on the likely conclusions of the family saga that had brought him to an asylum in the first place.

This chapter sheds light on the last part of G.’s internment and tries to explain why he was released. It is based on archival evidence found in the Racconigi asylum, a mental health hospital in the same region as Collegno but under a different Provincial authority, where he was sent for second psychiatric assessment. The chapter further sketches G.’s personality, as it emerged from this last series of events and from his writings, and draws a hypothesis on the likely conclusions of the family saga that had brought him into an asylum in the first place.

On 25 September 1930, after almost two years internment, G. was transferred to the Racconigi mental health hospital for a “perizia”, a further psychiatric appraisal. This procedure appears to be unusual, the Collegno archives do not have similar documentation for any other patient in that period of time. Perhaps the sympathetic Director and Dr. Sacerdote decided to push the course of events in order to find a solution to a case that they did not know how to handle. Transferring the patient, they would pass on the responsibility of a politically, professionally and morally difficult situation. Racconigi is a small town in the province of Cuneo, hence its asylum fell under another Provincial authority, something that reinforces the idea of an attempt by the Collegno team to get an independent medical opinion, from professionals who were likely to be a bit more removed from the patient’s influential, Turin-based brother.

Having re-obtained his belongings, G. was transferred to the Racconigi asylum, where he had to get rid of them again, following procedure: Sister Angelina took care of his hat, handkerchief, jacket, waist-coat, trousers, coat, canvas shirt, vest, pants, shoes, tie, collar and braces, the clothes of a middle class man with a hint of sophistication,1 despite being allocated to the category of “povero” on all his admission files, as he had no means and could not contribute to the payment of internment fees. G. had to wear a second uniform—light and dark brown striped canvas jacket and trousers—and entered another institution.

The Racconigi doctors expressed perplexity, they opened G.’s medical file notes with: “The history of this patient is without doubt the most complex one can imagine”.2 It is evident that some of the patient’s version of the facts did not entirely convince them:

up to the age of 23 his life can be summarised as a series of escapes from convents and of re-joining his brother who becomes regularly furious and brings back the “naughty” 23-year-old man to the convent.3

They evidently thought he was immature, at 23 he still behaved like a rascal. Further down, between the lines it is possible to read more of the doctors’ judgement and general disbelief: one person could not have been the cause of all his disgraces, G.’s life seemed to have revolved entirely around his brother in an obsessive, unhealthy way. The fact that he wanted to get married and could not because his brother prevented it by not giving him the necessary money, is accompanied by an exclamation mark. G.’s statement that his sibling must help him has an underlining of the word “must” because the medical professionals clearly questioned it.

However, other than his animosity against the detested brother, the obsessive and unjustified accusations against him, the lack of criticism, his immaturity and few other negative remarks, the picture did not lead to a diagnosis of mental illness: “In the manifestations of his actions here we could never notice anything outside normality”.4 The Director of the Racconigi psychiatric hospital therefore wrote that G. had to be released.5 Consequently, the Turin Tribunal, having read the medical assessment, declared that G. was not affected by mental alienation, he was neither dangerous to himself nor to others. His immediate release was authorised on 30 December 1930.6

G.’s Racconigi file also contains a letter he wrote to his brother a couple of weeks after having been transferred.7 It was composed in the presence of medical staff, as he stated, to try and find a peaceful reconciliation. It is interesting to note the change of tone: G. at that point knew he was winning, things had finally started moving the way he wanted and therefore he was displaying a reassuring, mature and wise tone. Crucially, he invited his brother to reopen dialogue and to agree to a compromise on the basis of the fact that it would be in his interest too:

You were sure that making me disappear in an asylum would have solved this dispute in your favour (…). But having been expelled from the PNF and having received a confirmed sentence was not enough to make you change direction? Do you really need another court trial to show what is concealed under your attempt to smuggle me as insane (…)?8

G. could suddenly threaten his brother: he asked him to withdraw, agree to pay what was due or else he would have to fight another battle in court, as G. would press charges against him. G. knew that his brother did not want this: having been found guilty of performing an abortion on an underage girl, he was expelled from the National Fascist Party and his reputation was ruined. Several years later he inserted a section on this episode in one of his books, explaining his reasons and defending his case9; it was, by his own admission, the most difficult moment of his otherwise refulgent career. So, G.’s thinking proved to be right. In the aftermath of the scandalous trial that had so many implications on his brother’s political and professional career, all legal charges against him were almost certainly dropped.

Sent back to the Collegno asylum on 6 January 1931, G. was released three days later. He was a free man and presumably a well-off one too, since it is plausible that his brother accepted to fulfil his financial requests, in order to close this story once and for all and avoid being called to court again.

To be released from an asylum, completely cleared of a mental illness diagnosis, was an exceptionally difficult result to achieve, G. must have been aware that it was an astounding victory. Of those who were interned in the Racconigi hospital between 1928 and 1930, 43.1% remained there for more than ten years, with an additional 9.6% whose internment would last between five and ten years.10 Besides, the Racconigi archives hold files of patients who did not have the same cultural tools and determination to fight the system: F.N., for instance, an unmarried farmer, described as “delirious impulsive homosexual”,11 interned in 1930 shortly after G., was one of 100 patients who underwent lobotomy in 1937.12 Evidently other stories, still to be investigated, did not have a happy end.

This chapter focused on G.’s internment in another institution and it showed that different approaches were adopted when dealing with homosexuality during the regime. It also highlighted G.’s strategies and his ambiguities. G. is a heroic figure in many ways and an anti-hero in other respects. In this, he well epitomises what the majority of individuals had to do in order to survive during the fascist regime, how they coped with the pressures they were forced to endure, how they compromised and how they resisted.