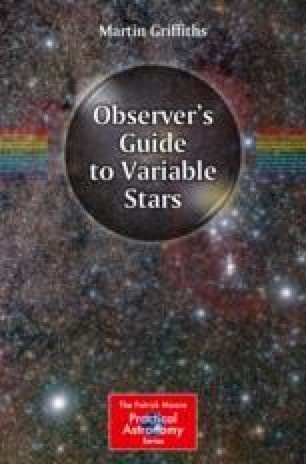 Eclipsing variable stars are quite simply a pair of stars revolving about their common center of mass in an orbit whose equatorial plane passes through or very near Earth. An observer on Earth thus sees one member of the binary pass periodically in front of the face of the other and diminish its light output by means of an eclipse. One of the first eclipsing variable stars studied, and was also noted in antiquity, was the bright star Algol in the constellation of Perseus. The first person to accurately work out why such dips in light output were being observed was John Goodricke, the remarkable deaf-mute astronomer who worked out the process in 1782.

ECLIPSING VARIABLES Variable Stars John Goodricke Light Output Roche Lobe
These keywords were added by machine and not by the authors. This process is experimental and the keywords may be updated as the learning algorithm improves.
This is a preview of subscription content, log in to check access.