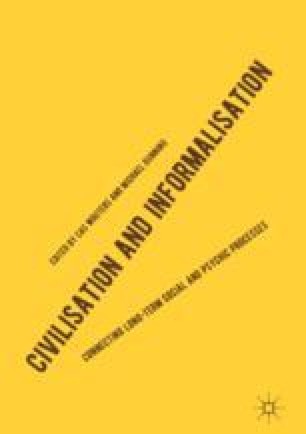 Civilisation and Informalisation pp 267-289 | Cite as

Informalisation and Integration Conflicts: The Two-Faced Reception of Migrants in the Netherlands

One of the features of established-outsider relations is ‘in-group blindness’ towards the long histories during which dominant codes of conduct have emerged. Concealed behind what is generally perceived as ‘normal’ or ‘natural’ manners, to which non-Western newcomers must adapt to swiftly, is a social learning process in which similar tensions and conflicts took place between majorities and minorities in the development of national codes. This sense of development is hidden by the dynamics of large-scale interweaving processes, in particular when it comes to irritations and quarrels over ‘modern’ versus ‘traditional’ manners and standards (Elias 1984).

For their comments on an earlier version, thanks to Rineke van Daalen, Cas Wouters and Michael Dunning, who also corrected my English.