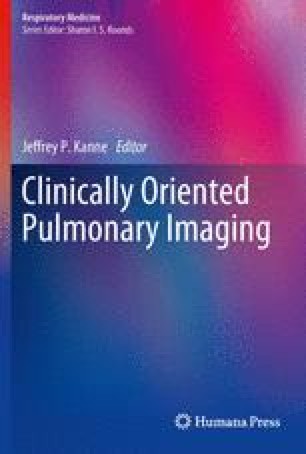 High-resolution computed tomography (HRCT) plays a key role in assessing the patient with known or suspected interstitial lung disease. While the primary function of HRCT is to distinguish patients with usual interstitial pneumonia (UIP), which is associated with IPF, from those without UIP, HRCT findings can often suggest other causes of diffuse lung disease. Although surgical biopsy is advocated in patients with suspected IIP who do not have a definite UIP pattern on HRCT, consensus between clinicians and radiologists with expertise in interstitial lung disease may suffice to establish a diagnosis.

IPF is uncommon with an incidence of 6.8–16.3 per 100,000 persons in the USA [6]. Men are affected twice as often as women, and the incidence increases with increasing age. While the exact cause of IPF remains unknown, environmental factors such as occupational dusts and fumes [7], cigarette smoke [8], and Epstein-Barr virus infection [9] may be contributory. Prognosis remains poor with fewer than 50% of patients surviving 5 years following diagnosis [10].

IPF is characterized histologically by UIP. The UIP pattern on HRCT consists of reticular opacities, traction bronchiectasis, and architectural distortion in a patchy subpleural and bibasilar distribution (Fig. 12.1) [11, 12]. These findings may be asymmetric but not unilateral. Honeycombing is a critical component of a confident, radiologic diagnosis of UIP (Figs. 12.2, 12.3). Honeycombing consists of clustered cystic spaces stacked upon a subpleural base. These cystic spaces have well-defined walls and typically range from 3 to 10 mm in size but may extend up to 2.5 cm in diameter [1, 5, 13]. Centrilobular and paraseptal emphysema may coexist with CT findings of UIP and should not be mistaken for honeycombing (Fig. 12.4) [8, 14, 15, 16, 17, 18]. Mild mediastinal lymphadenopathy is also common, typically involving the right paratracheal and subcarinal stations. The degree of lymphadenopathy typically correlates with the extent of parenchymal reticulation, although short axis lymph node measurements rarely exceed 1.5–2.0 cm in the absence of another superimposed cause [19, 20]. Ground-glass opacities can be associated with areas of fibrosis and may even represent regions of fibrosis. However, ground-glass opacities should account for a relatively minor component of parenchymal abnormality.

Studies have shown that the positive predictive value of a confident CT diagnosis of UIP by expert pulmonary radiologists ranges from 90 to 100%. However, these studies also show that a confidant diagnosis is not made in 25–50% of histologically proven cases of UIP [21, 22, 23, 24, 25, 26, 27]. Silva et al. demonstrated that the findings of basal honeycombing, the absence of subpleural sparing, and the absence of centrilobular nodules best distinguish UIP from chronic hypersensitivity pneumonitis and nonspecific interstitial pneumonia (NSIP) [28]. CT findings that should suggest alternative etiologies include micronodules; air trapping; non-honeycomb cysts; consolidation; a peribronchovascular distribution of fibrosis, and significant pleural calcifications, plaques, or effusion [5].

Complications associated with IPF include acute exacerbation (Fig. 12.5), pulmonary hypertension [29, 30, 31], pulmonary thromboembolism, coronary artery disease, bronchogenic carcinoma (Fig. 12.6), pneumothorax (Fig. 12.7), pneumomediastinum, and infection. Opportunistic organisms in this setting include Mycobacteria, Pneumocystis jiroveci, and Aspergillus species [32, 33]. Acute exacerbation occurs in approximately 5–10% of patients on an annual basis. Associated CT findings include new ground-glass opacities and consolidation in a peripheral, diffuse, or multifocal random distribution (Fig. 12.8). It is unclear whether these acute exacerbations represent rapid advancement of the primary disease or superimposed infection, infarction, or other pathology difficult to separate from the primary process [34, 35, 36, 37, 38, 39]. Pulmonary hypertension is commonly associated with IPF, although CT-derived vascular measurements may be of limited predictive value [40]. Bronchogenic carcinoma (Fig. 12.9) develops in approximately 10–15% of those with relatively longstanding IPF and usually manifests as new focal consolidation or nodule in a region of severe fibrosis [41]. The appropriate role of routine screening for these complications has not been defined [5].

Nonspecific interstitial pneumonia (NSIP) was first used to classify patients with interstitial lung disease and surgical biopsies not fitting into any well-defined histologic pattern [3]. Currently, idiopathic NSIP is recognized as a distinct clinicopathologic entity associated with a better prognosis than IPF. Patients with idiopathic NSIP tend to be lifetime non-smoking females of Asian ethnicity [42]. However, NSIP is most commonly associated with connective tissue disease such as systemic sclerosis or may be the sequela of a drug reaction.

While the HRCT findings of NSIP have proven to be more variable than was initially suggested [43, 44, 45, 46], the majority of cases have ground-glass opacities and findings of fibrosis including fine reticulation, traction bronchiectasis, and volume loss in a symmetric mid to lower lung distribution (Figs. 12.7, 12.8) [47, 48]. The severity and distribution of these parenchymal abnormalities are more uniform than in UIP. Distribution along the axial plane may be peripheral, peribronchovascular, or diffuse. When present and in the appropriate setting, a thin rim of subpleural sparing is a rather specific finding for NSIP and should heighten diagnostic confidence (Fig. 12.9) [43]. As with IPF, mild mediastinal lymphadenopathy is common, particularly at the right paratracheal and subcarinal stations, and correlates with the degree of parenchymal involvement. Given the high association of NSIP with underlying collagen vascular diseases and other disorders, associated abnormalities may be sought on available imaging studies.

Although NSIP is characterized by two histologic subtypes, cellular and fibrotic, there are generally no imaging features to reliably distinguish between the two. As would be expected, reticulation is more commonly seen with fibrotic subtype, although the cellular subtype may also demonstrate fine reticulation. In our experience, a posterior basilar and anterior apical distribution of reticulation, when present in the appropriate setting, is relatively specific for the fibrotic subtype. However, with regard to the extent of ground-glass opacity, consolidation, or traction bronchiectasis, there is no reliable separation in CT findings between the two subtypes [10, 49, 50, 51].

Additional findings on HRCT tend to be nonspecific or should suggest alternative etiologies. Relatively mild honeycombing may be seen in NSIP, but significant honeycombing is more commonly associated with a histologic diagnosis of UIP. The reported prevalence of consolidation in NSIP varies widely and may often represent superimposed infection or organizing pneumonia [10, 44, 48, 49, 51, 52, 53, 54, 55, 56, 57]. New consolidation or ground-glass opacities in an acutely ill patient with NSIP may represent an acute exacerbation (Fig. 12.10). While such exacerbations occur less commonly than in patients with IPF, the annual incidence of NSIP acute exacerbations may approach 5% [58]. With appropriate treatment, some findings of NSIP may be reversible on follow-up examination [59].

Characteristic HRCT findings of OP include unilateral or, more commonly, bilateral, patchy areas of consolidation, characteristically involving the lower lobes. Consolidation is present on HRCT in at least 90% of patients and follows a subpleural or peribronchovascular distribution in approximately 50% of patients (Fig. 12.11) [60, 61]. Foci of consolidation may be migratory on serial imaging. Common associated findings include ground-glass opacities in a random distribution (60%) (Fig. 12.12), air bronchograms (Fig. 12.13), and mild bronchial dilation. Lung volumes are typically preserved, and architectural distortion is generally absent. Small pleural effusions may occur in a small minority of patients. The reverse-halo sign (Fig. 12.14) was first described in the setting of OP as a relatively specific finding. This sign refers to a central region of ground-glass opacity surrounded by a > 2 mm crescent or ring of denser consolidation. Kim et al. reported the reverse-halo sign in 19% of biopsy proven cases of OP [62]. However, a reverse halo sign has since been reported in numerous separate entities [62]. Reticulation and honeycombing are uncommon to rare but when present are associated with an increased risk of progressive disease [63, 64, 65].
With treatment, clinical and radiologic response is often striking. Symptomatic improvement may be expected within 1–2 days, while radiologic resolution occurs over several weeks (Fig. 12.15) [66]. Although relapse is not common, it does not worsen the long-term prognosis.

Respiratory bronchiolitis (RB), RB-associated interstitial lung disease (RB-ILD), and desquamative interstitial pneumonia (DIP) are included in the most recent IIP classification despite being almost invariably associated with cigarette smoking. RB, RB-ILD, and DIP represent a spectrum of smoking-related interstitial lung disease characterized by the accumulation of pigmented macrophages in the respiratory bronchioles and alveoli [67]. With RB, pigmented macrophages are limited primarily to the respiratory bronchioles whereas macrophage accumulation is more extensive with RB-ILD and diffuse in DIP. By definition, patients with RB are asymptomatic while those with RB-ILD and DIP may present with dyspnea, cough, and abnormal pulmonary function tests [68].

Characteristic HRCT findings of RB include mild, poorly defined centrilobular nodules in a mid and upper lung distribution (Fig. 12.16) with scattered, patchy ground-glass opacities [69]. Associated findings include occasional lobular air trapping and emphysema. With RB-ILD, the extent of poorly defined centrilobular nodules is greater (Fig. 12.17), and more extensive patchy ground-glass opacity may be present (Fig. 12.18) [70]. With smoking cessation, these parenchymal abnormalities are reversible to some degree [71].
DIP is rare and associated with more severe and diffuse parenchymal abnormality [72]. HRCT findings consist of diffuse ground-glass opacities with peripheral and lower lung predominance (Fig. 12.19) [12]. Reticular opacities are common but are often relatively mild and limited to a bibasilar distribution (Fig. 12.20). Small well-defined cysts may occur in areas of ground-glass opacity [73]. Centrilobular nodules are uncommon, while CT findings of respiratory bronchiolitis tend to be less severe than in RB-ILD [74]. DIP on CT may be indistinguishable from NSIP, acute or subacute hypersensitivity pneumonitis, and infections such as Pneumocystis jiroveci [67].

Acute interstitial pneumonia (AIP) is diagnostically reserved for diffuse alveolar damage of unknown origin. Histologically, AIP is indistinguishable from acute respiratory distress syndrome (ARDS) secondary to shock or sepsis. CT findings in the early exudative phase include dependent, subpleural consolidation and ground-glass opacities in a geographic, patchy, symmetric, and bilateral distribution (Fig. 12.21). Multiple foci of lobular sparing contribute to a geographic pattern. Greater than 50% of the lung parenchyma is typically involved [75].
In the subacute, organizing stage, traction bronchiectasis and architectural distortion progress with the duration of illness (Fig. 12.22). These findings are characteristically prominent relative to any degree of reticulation or honeycombing [76]. Pleural effusions are found in approximately 30%. While typically indistinguishable from ARDS, AIP is more commonly lower lobe predominant in distribution with a greater prevalence of fibrotic changes [77, 78]. As with UIP and NSIP, the degree of fibrotic changes positively correlates with a worsened prognosis. ARDS, conversely, is more commonly associated with interlobular septal thickening. Differential considerations for an AIP/ARDS pattern include pulmonary edema, widespread infection, pulmonary hemorrhage, and acute eosinophilic pneumonia [67, 76, 79].

If a patient with AIP recovers, consolidation and ground-glass opacities typically clear in a progressive fashion, while residual areas of reticulation and hypoattenuation remain, particularly in the nondependent lung [76].

Lymphoid interstitial pneumonia (LIP) is a rare diagnosis most commonly seen in patients with Sjögren syndrome. Additional associations include other connective tissue and autoimmune diseases as well as AIDS, the latter particularly in children. Despite being a lymphoproliferative disorder, LIP is included in the most recent classification system as an interstitial lung disease, given its inclusion in associated differential diagnoses of diffuse lung disease and its histologic pattern, which is characterized by a polyclonal lymphocytic and plasma cell infiltration of the alveolar septum [1].

The common HRCT findings of LIP include bilateral ground-glass opacity, thin-walled perivascular cysts located predominantly within the lower lobes, and poorly defined centrilobular nodules (Figs. 12.23, 12.24, 12.25). The cysts tend to range from 1 mm to 30 mm in diameter and are typically fewer in number compared with lymphangioleiomyomatosis. Less common findings include perilymphatic nodules and septal and bronchovascular thickening [67, 80, 81, 82]. Nodules or calcifications may develop in cysts, reflecting amyloid deposition.

In summary, HRCT is critical to evaluating patients with known or suspected diffuse lung disease. In patients with the appropriate clinical presentation, a highly confident diagnosis of UIP on HRCT is sufficient to establish a diagnosis of IPF. HRCT may also suggest the presence of other interstitial or diffuse lung diseases. Finally, consensus among the clinician, radiologist, and pathologist may be required to establish a diagnosis when the pieces of the diagnostic puzzle are not straightforward.