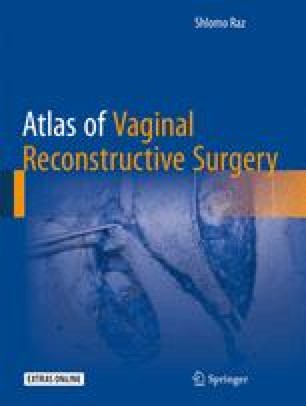 Anterior vaginal wall defects, or cystoceles, are very common. Approximately 50 % of women seeking routine gynecologic or urologic care have some degree of anterior prolapse. Most of these defects are asymptomatic, but as the leading edge of the prolapse extends beyond the hymen, the defect may become symptomatic. The cystocele may present itself as a vaginal bulge, or it may present with urinary symptoms of urgency, frequency, stress or urge incontinence, or even obstructive voiding symptoms. Risk factors for primary or secondary prolapse are age, menopausal status, parity, collagen defects, prior hysterectomy, increased body mass index, smoking, and chronic pulmonary disease.

Four-corner bladder and bladder neck suspension for lateral defect cystocele. The procedure is used for the repair of cystocele when the lateral defect is predominant. Two oblique incisions are made in lateral vaginal wall extending to the bladder base. The periurethral and perivesical fasciae are dissected laterally, and the retropubic space is entered to expose the attachment of the urethropelvic and vesicopelvic fascia to the arcus tendineus fascia pelvis. #0 monofilament polypropylene sutures are used to incorporate a wide segment of vesicopelvic fascia and perivesical fascia at the bladder base. A second suture is applied to incorporate the urethropelvic fascia, periurethral fascia, and perivesical fascia at the bladder neck and urethra. Multiple passes of the needle allow the incorporation of a strong anchor of tissue. A small puncture is performed in the suprapubic area, and a double-pronged passer is used to transfer the sutures from the vagina to the suprapubic area. After cystoscopy, the sutures are tied without tension (MP4 550184 kb)

Transvaginal hysterectomy for vaginal prolapse. The cervix is grasped with a four-pronged tenaculum (Lahey clamp) and retracted. A circular incision is made on the cervix using a coagulation knife. Anteriorly, the cervix and anterior uterus are dissected from the bladder wall without entering the peritoneum. Posterior cervix and posterior uterus are dissected free from the vaginal and rectal wall. The posterior peritoneum is entered (cul-de-sac). We isolate the clamp and tie the sacrouterine–cardinal complex using #0 delayed absorbable sutures. We isolate the clamp and tie the uterine pedicle. After performing the same maneuver on both sides, the uterus is everted, the anterior peritoneum is opened, and the bladder is retracted anteriorly. The broad ligaments are clamped and tied. Laparotomy pads are inserted into the peritoneum and the bladder retracted anteriorly. Vault suspension sutures of #1 PDS (polydioxanone) are applied from outside the vaginal wall lateral to the cuff, to the prerectal fascia, and to the origin of the sacrouterine–cardinal ligaments (lateral to the sacrum, medial to the levators, and distal to the sacrospinous ligament). The end of the needle is passed back 1–2 cm from the original entrance. Purse-string sutures are applied to the prerectal fascia, the sacrouterine–cardinal complex stump, the broad ligaments, and the perivesical fascia at the bladder base (pubocervical). Two purse-string sutures are applied and tied to close the cul-de-sac. After closure of the vaginal cuff, the vault suspension sutures are tied, providing depth and support to the vaginal cuff (MP4 624982 kb)

Enterocele repair. The vaginal cuff is marked with absorbable sutures. A vertical incision is made at the cuff of the vagina. The vaginal wall is dissected free to expose the enterocele sac. The enterocele sac is open and laparotomy pads are inserted to retract the anterior bladder. #1 PDS (polydioxanone) sutures are used. From outside the vaginal wall, the needle enters the peritoneum to incorporate the prerectal fascia origin, origin of the sacrouterine–cardinal ligaments (lateral to the sacrum, medial to the levators, and distal to the sacrospinous ligament). The end of the needle is passed back 1–2 cm from the original entrance. The same maneuver is performed in the contralateral side. Two purse-string sutures are applied to the prerectal fascia, lateral peritoneum, and the bladder base and tied. After excision of excess vaginal wall, the vault suspension sutures are tied to provide depth and support to the cuff (MP4 624246 kb)