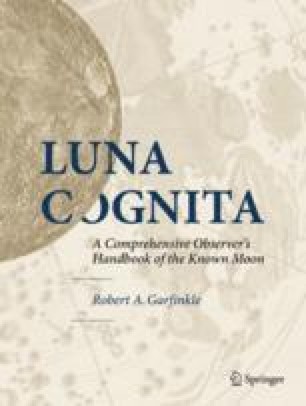 In the last few chapters, we have been looking closely at different types of surface features. In this chapter, we will once again pull back from the surface of the Moon and look from a distance to observe unusual temporary events occurring on the Moon. You will notice that, as you observe over time, lunar features will seem to change appearance in predictable ways from night to night, due to the changing angle of solar illumination, and the interplay of light and shadows. These cyclical changes are regular from one lunation to the next, but lunar observers have reported, since A.D. 557, over 3000 unusual and unanticipated short-duration “lunar events” that have collectively become known as Lunar Transient Phenomena or Phenomenon (LTP). (In England they use the term Transient Lunar Phenomena (TLP) to describe these observed lunar abnormalities). Observed TLPs are apparently rare events. Though there are over 33,000 craters on the nearside, that can be observed in amateur instruments, LTP have been reported in slightly less than 200 features at least once with about 80 percent of all observations having taken place in less than 12 of those 200. Sixty percent of the reported events are found in only six locations.