An Introduction to Mathematical Epidemiology 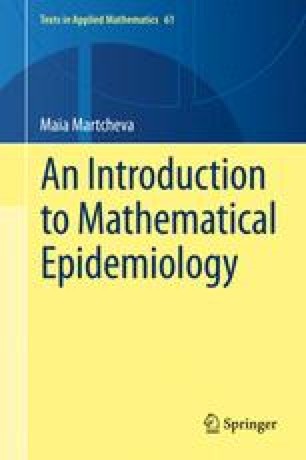 An Introduction to Mathematical Epidemiology pp 1-8 | Cite as

This chapter introduces the subject of epidemiology and includes a classification of infectious diseases based on their route of transmission. A number of definitions of key epidemiological concepts are given. The chapter introduces a brief history of the study and modeling of infectious diseases, highlighting the seminal contributions of Sir Ronald Ross. Finally, the chapter gives a description of the modeling process in biology and a list of the types of models used today in mathematical biology.

West Nile Virus Avian Influenza Severe Acute Respiratory Syndrome Communicable Disease Epidemic Model
These keywords were added by machine and not by the authors. This process is experimental and the keywords may be updated as the learning algorithm improves.
Download chapter PDF

Epidemiology is the subject that studies the patterns of health and illness and associated factors at the population level. The word “epidemiology” is derived from the Greek terms epi, which means “upon,” demos, which means “ people,” and logos, which means “study.” This etymology implies that the subject of epidemiology applies only to human populations. The role of father of epidemiology is often assigned to the Greek physician Hippocrates (460–377 b.c.e.), who described the connection between disease and environment [83]. The term “epidemiology” appears to have first been used to describe the study of epidemics in 1802 by the Spanish physician de Villalba in Epidemiologia Espanola [30]. Until the twentieth century, epidemiological studies were mostly concerned with infectious diseases. Nowadays, the leading causes of deaths worldwide are diseases such as stroke and coronary heart disease [132], positioning diseases that do not transmit from one person to another as a central concern of epidemiology. Among infectious diseases, those that dominate worldwide as a cause of death include lower respiratory infections (such as pneumonia) and HIV. In this book, we will be concerned with mathematical modeling of infectious diseases.

A pathogen reservoir is an ecological niche in which a pathogen lives and multiplies. Such a reservoir plays a significant role in the spread of the pathogen. According to their reservoir, the microbial agents are classified as human, animal, and environmental. Human pathogens circulate mostly among humans, and humans play a role in their transmission. Animal pathogens have vertebrate animals as a reservoir, and circulate primarily among animals. Epidemiologically, this is significant, because many such pathogens adapt to infect humans through animal-to-human transmission. Infections that spread from vertebrate animals to humans are called zoonoses. Environmental pathogens multiply primarily in the environment (typically water and soil) and spread from there to animal and human populations.

Many infectious diseases have more than one pathway of transmission. For instance, HIV is primarily transmitted through sexual contact, but it can also be transmitted by blood transfusion or needle sharing. Furthermore, HIV can be transmitted vertically at birth from an infected mother to her child. Avian influenza H5N1 is primarily transmitted through direct contact with infected poultry and rarely directly from human to human. However, significant evidence now exists that H5N1 can persist in the environment, and the environmental route of transmission is gaining more importance.

1.3 Basic Definitions in the Epidemiology of Infectious Diseases

There are a number of concepts in epidemiology strictly related to infectious diseases. These concepts play an important role in the construction of mathematical models by adding various features to the model. Some of the most widely used concepts are listed below. Others will be introduced as new models are discussed.

This list is by no means exhaustive. More complete lists of terms used in infectious disease epidemiology can be found in the many excellent books on this subject (e.g., [56]).

The first significant epidemic described by historians was the plague of Athens, which struck the city of Athens in 430–426 b.c.e. The most precise description of that plague was provided by the scientific historian Thucydides (460–400 b.c.e.) in his History of the Peloponnesian War. His description is based on personal experience and includes symptoms, progression of the disease, and numbers of deaths. The causative agent of the plague of Athens is still being debated [131, 134]. Hippocrates (459–337 b.c.e.), in his treatise Epidemics, delineates the factors that affected the spread of disease at that time. In 165–180 c.e., the Roman Empire and Egypt were affected by smallpox. Tens of millions of people died [5].

One of the most well documented epidemics that devastated Europe was the Black Death. The Black Death spread throughout the Mediterranean and Europe and is estimated to have killed about 50–100 million people in the years 1348–1350 [5]. Recent DNA evidence from victims in Europe suggests that the pathogen responsible was the Yersinia pestis bacterium, which causes several forms of plague [69]. The Black Death pathogen reappeared in Europe in multiple locations into the nineteenth century. Another disastrous epidemic attacked the Aztec population in the sixteenth century. This smallpox epidemic killed an estimated 35 million people. In the early twentieth century, an influenza pandemic killed an estimated 20 million of the world’s population. At present, we still have significant outbreaks of epidemics: The Bombay plague 1905–1906, the 2003 severe acute respiratory syndrome (SARS), and the H1N1 swine flu pandemic of 2009. Threats of epidemics and pandemics exist continually, since viruses mutate very quickly and can jump species barriers, infecting humans, potentially on a mass scale.

Although epidemiology itself has a long history, the mathematical study of diseases and their spread is only about 350 years old. The first statistical study of infectious diseases is attributed to John Graunt (1620–1674), whose 1663 book Natural and Political Observations Made upon the Bills of Mortality was concerned with methods of public health statistics. A century later, Daniel Bernoulli used mathematical methods to analyze mortality from smallpox. In 1766, he published what is now considered the first epidemiological model (reviewed in [22]). Bernoulli argued that inoculation with live virus obtained from a mild case of smallpox would reduce the death rate and thereby increase the population, even if the inoculation itself might occasionally be fatal. A contemporary reformulation of Bernoulli’s approach in terms of differential equations is given in [55].

In the mid nineteenth century, Louis Pasteur made remarkable breakthroughs in the causes and prevention of disease. He reduced mortality from puerperal fever and created the first vaccines for rabies and anthrax. His medical discoveries provided direct support for the germ theory of disease. Around the same time, the founder of modern bacteriology, Robert Koch, identified the specific causative agents of tuberculosis, cholera, and anthrax, thus giving experimental support to the concept of infectious disease. He was also famous for the development of Koch’s postulates. In the late 1800s, science could finally explain the mechanism of how one becomes ill. The concept of passing a bacterial disease through contact between an infected individual and a healthy one became known. This paved the way for the mathematical modeling of infectious diseases.

Mathematical modeling of infectious diseases made significant strides with the work of William Hamer, in the early twentieth century. He was looking for an explanation of the recurrence of measles. It appears that Hamer was the first to use the mass action law in modeling infectious diseases. But it is Sir Ronald Ross who is considered the father of modern mathematical epidemiology. He did pioneering work on malaria and discovered that it is transmitted between humans and mosquitoes. For his work on malaria, Ross received the Nobel Prize in 1902. Sir Ronald Ross was concerned with prevention of malaria. Despite his contributions, he could not convince his contemporaries that malaria could be eradicated simply by reducing the number of mosquitoes. In the second edition of his book The Prevention of Malaria, published in 1911, he developed mathematical models of malaria transmission and derived a threshold quantity, nowadays known as the basic reproduction number. In Ross’s time, mathematical modeling of infectious diseases was not well accepted. Nonetheless, Ross was a supporter of the use of mathematical tools in epidemiology. A British Medical Journal quotes him as follows [71]:

As a matter of fact all epidemiology, concerned as it is with the variation of disease from time to time or from place to place, must be considered mathematically, however many variables are implicated, if it is to be considered scientifically at all. To say that a disease depends upon certain factors is not to say much, until we can also form an estimate as to how largely each factor influences the whole result. And the mathematical method of treatment is really nothing but the application of careful reasoning to the problems at issue.

Mathematical epidemiology was raised to a new level by the model of the spread of infectious diseases, published by Kermack and McKendrick in 1927. In their joint article “A contribution to the mathematical theory of epidemics” [84], Kermack and McKendrick published for the first time a deterministic epidemic model that included susceptible, infected, and removed individuals, much like the one we will discuss in Chap.  2 In fact, their model is an age-since-infection model, whose contemporary version is discussed in Chap.  13. Their model does not include natural birth and death rates and, consequently, models only disease outbreaks. To capture epidemic modeling of diseases that can become established in a population and persist, Kermack and McKendrick published Part II and Part III of their “A contribution to the mathematical theory of epidemics” in 1932 and 1933 respectively. Because of their seminal importance to mathematical epidemiology, the Kermack–McKendrick fundamental trilogy of papers was reprinted in 1991 [85, 86, 87].

The modeling process, schematically depicted in Fig. 1.1, requires translation of a biological scenario into a mathematical problem. The modeling process typically begins with a clear description of the processes based on the scientist’s understanding of the system. The translation into mathematical equations should be made with a specific goal or biological question in mind. Then the verbal description of the system is encoded in mathematical equations. The model should incorporate only those features that are relevant to the specific goal or biological question in mind. Once the model is formulated, it can be investigated with a number of mathematical tools:

After the model has been understood, we must interpret its results in the light of the biological scenario considered and potentially seek the answer of the biological question that was set forth at the beginning. At the very least we must address these questions: What did we learn about the real world from the model? Is our model’s message supported by the information about the system?

Mathematical models usually consist of parameters and variables that are connected by relationships. Variables are abstractions of the system’s properties that can be quantified or measured. Models can be classified in multiple ways:

Mathematical models are of great importance in the natural sciences, including biology and epidemiology. They help us to gain new understanding about a system, organize and make sense of biological data, obtain the response behavior of the system, seek optimal performance and intervention strategies, and make predictions about the system. Mathematical models of infectious diseases are the focal point of this book.