Potentiating Health and the Crisis of the Immune System 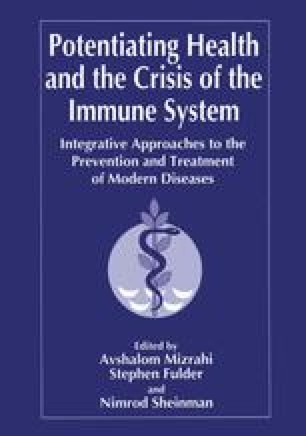 For valid, albeit pragmatic, reasons, orthodox medicine is founded on the erroneous Cartesian philosophy that the mind and the body are separate and therefore, that what happens with one of the two has no effect on the other. Whilst the self-evident fallacy of this standpoint is now being recognised in some areas, there has traditionally been much resistance to the notion that one can alter disease processes through psychological means, despite the work that has been done in areas of chronic and/or life threatening diseases such as cancer. Indeed, this work is frequently dismissed as anecdotal or methodologically unsound, rather than acknowledging that there is an effect, and seeking to develop and investigate a hypothesis to explain the effect.

This study is an attempt to redress this imbalance by investigating the hypothesis that there is an intimate relationship between psychological health and physical health, and that psychological factors are significant in the aetiology of (in this case) ischaemic heart disease (IHD) and that the disease process can be arrested and possibly reversed by addressing those psychological factors.

The method chosen to investigate this hypothesis is a randomised, controlled study of people with a diagnosis of IHD. Eligible people are randomised into the control or experimental sub-group appropriate to their diagnosis (angina or MI). The experimental group receive a series of counselling sessions, usually about 10 although the number is not critical, and a specifically written and recorded audio-cassette tape to guide them through a visualisation of the heart damage being repaired. The style of counselling is humanistic, essentially person centred, and the focus of the counselling is to identify the stressors that are relevant for that individual.

Evaluation of effect is through the scores on 2 questionnaires which are administered before randomisation, after 3 months (or 2 weeks after completion of counselling for the experimental group), after 6 months and after 12 months. Records are also kept of hospital admissions for cardiac related conditions, referral rates for coronary artery bypass graft surgery, medication usage and patient self-report.

The study is currently approximately half way through, so full results are not yet available, but early indications are that a definite improvement in clinical status occurs as a result of the experimental programme, with subjects experiencing a marked improvement in all parameters eg symptoms, wellbeing, medication useage. There also appears to be a trend emerging with regard to the broad life experiences of IHD subjects (as distinct from personality.

Irritable Bowel Syndrome Ischaemic Heart Disease Coronary Artery Bypass Graft Surgery Ideal Place Standard Medical Care
These keywords were added by machine and not by the authors. This process is experimental and the keywords may be updated as the learning algorithm improves.
This is a preview of subscription content, log in to check access.

Cite this chapter as:
Stonier C. (1997) An Investigation into the Effects of a Counselling and Guided Imagery Programme on the Outcome of People with Stable Angina and Following Myocardial Infarction. In: Mizrahi A., Fulder S., Sheinman N. (eds) Potentiating Health and the Crisis of the Immune System. Springer, Boston, MA. https://doi.org/10.1007/978-1-4899-0059-3_17