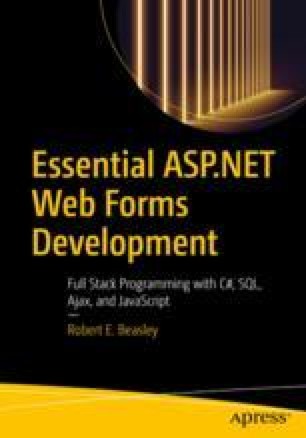 As mentioned in the previous chapter, a server control is an object that is displayed on an ASP.NET Web page. When a Web page is requested from a server via an HTTP request, the server processes the page request (as described in Chapter  1, titled “Web Application Development”) and then sends the client the resulting HTML code via an HTTP response. When the Web browser receives the HTTP response, it renders the page and displays it for the end user. In the context of an ASP.NET Web application, the term render refers to the process of creating a visual representation of the page, including all of its associated server controls, based on the HTML code received from the server in its HTTP response. In that chapter, we looked at six basic server control classes: the Label class, the TextBox class, the Button class, the Table class, the TableRow class, and the TableCell class. Although these six classes provided us with enough ASP.NET functionality to get started, there are many other server control classes in the .NET Framework Class Library.