Responses to Victimizations and Belief in a Just World 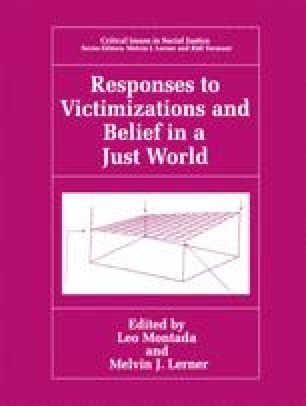 It is over 30 years since the publication of Lerner & Simmons (1966). The research reported in that manuscript arose, initially, out of the efforts to explain why scientifically trained university students insisted on condemning poverty stricken victims as “lazy and no good” while denying the evidence of their victimization by overwhelming economic changes. The explanation offered for that seemingly motivated resistance was that people, for the sake of their security and ability to plan for the future, need to believe they live in an essentially “just” world where they can get what they deserve, at least in the long run. It was further reasoned that being confronted with innocent victims of undeserved suffering poses a threat to that fundamental belief, and as a consequence, people naturally develop and employ ways of defending it. This may involve acting to eliminate injustices. But failing that, by blaming, rejecting, or avoiding the victim, or having faith that the victim will eventually be appropriately compensated, people are able to maintain their confidence in the justness of the world in which they must live and work for their future security.

Married Couple Veridical Perception Innocent Victim Future Security Fundamental Belief
These keywords were added by machine and not by the authors. This process is experimental and the keywords may be updated as the learning algorithm improves.
This is a preview of subscription content, log in to check access.