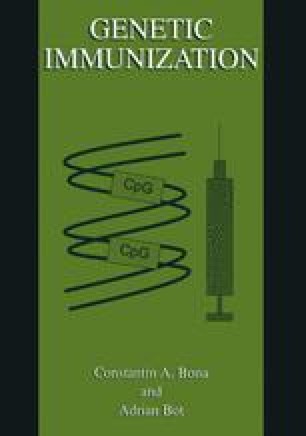 Viruses as obligatory cellular pathogens have always posed an important challenge in terms of generating effective immune responses by vaccination. Viruses enter the organism through various routes and infect certain categories of cells, borrowing the host machinery in order to replicate the genetic material and to synthesize structural and nonstructural proteins. Thus, virus infection leads to a state in which viral products that could be perceived as nonself by the immune system are mostly hidden beyond host cell membranes. The immune system evolved to recognize such products in the form of proteins or peptides of virus origin, generated through a complex intracellular machinery that samples the cytoplasmic milieu in a continuous manner. The evolution of cytotoxic T-cells is thought to be directly linked to the evolution of this intracellular sampling system, with its three main components: proteasomes, TAP, and MHC Class I molecules, whereas that of B-cells parallels the natural variation of viral proteins. Since the metabolic machines of host cell and virus are so intimately intermingled, the immune effector mechanisms evolved in such a way that either inhibits to various extent or eliminates the cells that are recognized as infected. For example, whereas cytokines such as IFN-γ inhibit viral replication, perforin released by cytotoxic cells triggers the lysis of target cells. Thus, this type of effector mechanism is brought into play whenever T-cells recognize foreign peptides on self-MHC molecules. The process of virus recognition by immune cells is more complex and is certainly not limited to the self—non-self discriminating ability of T-cells. For example, experimental models created by transgenic expression of viral antigens in certain cell types revealed that T-cells can, but do not always, react to foreign antigens (Roman et al., 1990; Oldstone et al., 1991; Ohashi et al., 1991). Two new elements of the immune system come into play at this point: innate immunity and professional APC. The current paradigm is that discrimination of nonself and sequestered self-antigens restricted to peripheral organs occurs through a process that has as central elements the employment of natural immunity and professional APC, namely, that natural immunity has the ability to rapidly detect viral infection and signal this state to other immune cells, as well as to produce effectors that limit the infection until the adaptive immunity develops. A subset of signals generated by the innate immunity activate professional APC like dendritic cells that upregulate costimulatory molecules and migrate to local lymphoid organs, where they prime specific T-cells (Steinman, 1991). Stimulatory cytokines such as IL-12 and IFN-γ, together with costimulatory molecules expressed by professional APC, such as B7.1 and B7.2, enable the naive T-cells to receive a positive signal through TCR. In contrast, TCR engagement in the absence of costimulation is thought to induce T-cell anergy (Bretscher and Cohn, 1970; Lamb and Feldman, 1984; Quill and Schwartz, 1987). Thus, this mechanism reduces the chance that certain self-antigens induce activation of autoreactive T-cells that escape thymic negative selection, while assuring a proper response against viruses. However, at least two circumstances necessitate supplementary level of regulation for the immune response. For example, during a local viral infection, there is the possibility that sequestered self-antigens are released and presented by professional APC to autoreactive T-cells. Besides this bystander mechanism of priming, some viral antigens may cross-react with self-antigens, leading to activation of autoreactive T-cells as a direct consequence of virus infection. Consequently, peripheral tolerance mechanisms should operate at the stage of mature activated and postactivated T-cells, thus allowing the occurrence of antiviral but minimizing anti-self responses. Transgenic models such as Fas and Fas-L knockout, IL-2 defective, and CTLA-4 knockout elegantly illustrated this point (Van Parijs et al., 1996; Sadlack et al., 1995; Tivol et al., 1995). It is very likely that the postactivation control of T-cells is directly determined by the quantitative level of antigen that is presented by APC, together with signals emitted by the innate immunity, namely, that a tremendous decrease in antigen level would determine a decline of the T-cell effector population, allowing instead the emergence of T memory cells that depend on the persistence of minute amounts of antigen. This is the most probable scenario during a successful response against acute viral infections that leads to the elimination of the virions from organism. If the activated T-cells are exposed in a continuous manner to a high level of antigen, as in most cases of virus-triggered autoimmune responses, T-cells are eliminated in a Fas and IL-2 dependent manner (Refaeli et al., 1998). Because this process is strictly dependent on TCR engagement in an antigen-specific manner, it may fail in certain circumstances, for example, when the self-antigen is in limited quantity and present in cells that are physiologically essential. For example, in spite of the normally operating mechanisms that maintain peripheral tolerance, transgenic mice that express viral antigen in periphery develop autoimmune diseases when infected with virus (Roman et al., 1990; Oldstone et al., 1991; Ohashi et al., 1991). Overall, the immune system has evolved such that the recognition and elimination of viruses does not frequently lead to autoimmunity.

Influenza Virus Simian Immunodeficiency Virus Rabies Virus Measle Virus Bovine Viral Diarrhea Virus
These keywords were added by machine and not by the authors. This process is experimental and the keywords may be updated as the learning algorithm improves.
Download to read the full chapter text