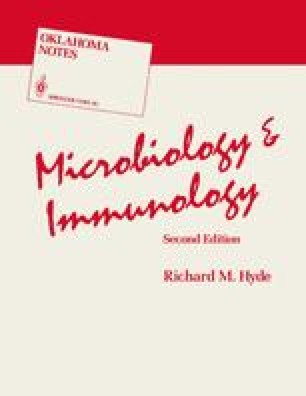 The outermost component of a virion is the capsid, made up of protein subunits called capsomers. The capsid serves four important functions: (1) it protects the viral genome, (2) it aids in infection by attaching the virion to susceptible cells, (3) it is the stimulus for antibody production, (4) it serves as the antigen in serologic tests and (5) responsible for tissue tropism in naked viruses such as polio.

Human Immunodeficiency Virus Influenza Virus Respiratory Syncytial Virus Herpes Zoster Rabies Virus
These keywords were added by machine and not by the authors. This process is experimental and the keywords may be updated as the learning algorithm improves.

Made less virulent, usually by passage through an abnormal host.

The outer-most component of a virion, the protein coat which protects the nucleic acid from the environment.

The structural protein subunits of the viral capsid.

has deletion mutation which makes it unable to replicate by itself; needs a helper virus for replication but has normal capsid proteins. Can cause cell transformation and may be involved in persistent infections.

The structure which some viruses acquire as they leave the host cell. It consists of viral protein components (usually glycoproteins) and host-cell derived lipids and lipoproteins of the cell membrane. Lipid solvents react with the envelope and inactivate the infectivity of the virus.

A form of inapparent infection following a clinical case in which the pathogen is not completely eliminated, but remains viable in the tissues after the host recovers. The host may be infectious.

Proteins associated with the nucleic acid of the viral genome. These are internal proteins and may be structural, or enzymes such as RNA-dependent DNA polymerase.

An infectious proteinaceous particle; virus-like but with no nucleic acid content.

Naked viral nucleic acid intracellularly located. It may remain dormant in the host cell or it may become integrated into the host cell genome.

The process whereby the viral genome is freed into the internal milieu of the host cell. After this process occurs the viral genes are read and synthesis of early proteins, etc. begins.