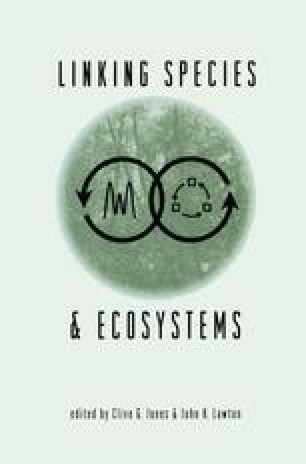 Biogeochemical Processes and Marine Benthic Community Structure: Which Follows Which?

In contrast, microalgal primary production in shallow benthic sediments may be strongly controlled by the animal community. In many systems, grazers completely consume the benthic algae for at least a portion of the year. We predict that the absence of grazers would have a dramatic effect on rates of primary production but we know less about the effect of the addition or loss of individual species in the benthic community. Large epibenthic animals have the largest effect on primary production in shallow systems whereas smaller infauna seem less able to deplete stocks of benthic microalgae.

There is some evidence that the structure of the animal community alters sulfur cycling in the sediments. In laboratory experiments, the partitioning between oxic metabolism and sulfate reduction shifts with the type of animal community. Sulfur burial over geologic time has decreased, perhaps due to the evolution of deeper burrowing organisms.

Finally, it appears that changes in benthic community structure have a large potential to alter nitrogen dynamics, especially inorganic nitrogen release and denitrification. Because the nitrogen cycle is closely linked with primary production and carbon loading to sediments, it provides a feedback mechanism between the fauna and other biogeochemical processes.

Sulfate Reduction Benthic Community Biogeochemical Process Benthic Alga Animal Community
These keywords were added by machine and not by the authors. This process is experimental and the keywords may be updated as the learning algorithm improves.
This is a preview of subscription content, log in to check access.