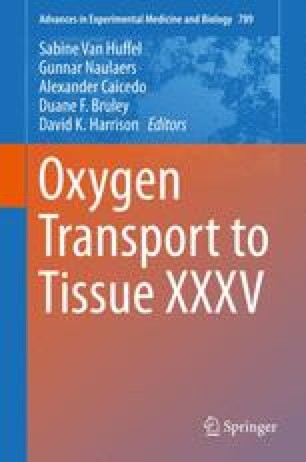 Inhaling or ingesting hydrogen (H2) gas improves oxidative stress-induced damage in animal models and humans. We previously reported that H2 was consumed throughout the human body after the ingestion of H2-rich water and that the H2 consumption rate (\( {\text{V}}_{{\text{H}}_{2}}\)) was 1.0 μmol/min/m2 body surface area. To confirm this result, we evaluated \( {\text{V}}_{{\text{H}}_{2}}\)during the inhalation of low levels of H2 gas. After measuring the baseline levels of exhaled H2 during room air breathing via a one-way valve and a mouthpiece, the subject breathed low levels (160 ppm) of H2 gas mixed with purified artificial air. The H2 levels of their inspired and expired breath were measured by gas chromatography using a semiconductor sensor. \( {\text{V}}_{{\text{H}}_{2}}\) was calculated using a ventilation equation derived from the inspired and expired concentrations of O2/CO2/H2, and the expired minute ventilation volume, which was measured with a respiromonitor. As a result, \( {\text{V}}_{{\text{H}}_{2}}\) was found to be approximately 0.7 μmol/min/m2BSA, which was compatible with the findings we obtained using H2-rich water. \( {\text{V}}_{{\text{H}}_{2}}\) varied markedly when pretreatment fasting to reduce colonic fermentation was not employed, i.e., when the subject’s baseline breath hydrogen level was 10 ppm or greater. Our H2 inhalation method might be useful for the noninvasive monitoring of hydroxyl radical production in the human body.

Oxygen Radical Production Experimental Activation Energy Colonic Fermentation Special Biological Property Minute Ventilation Volume
These keywords were added by machine and not by the authors. This process is experimental and the keywords may be updated as the learning algorithm improves.
This is a preview of subscription content, log in to check access.

This study was supported by the Japan Society for the Promotion of Science (Grant-in-Aid 21240057, 21659211, 24659288) and the Intramural Research Fund of the National Cerebral and Cardiovascular Center (22-4-5, 22-1-5). The authors have no conflicts of interest to report. We thank the volunteers who participated in this study.