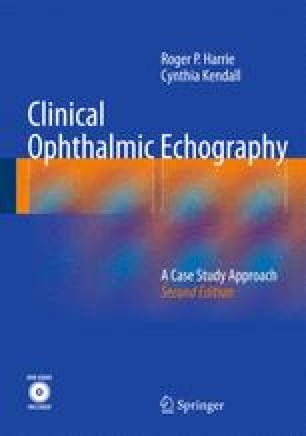 ON is a 73-year-old man who was noted to have a lightly pigmented choroidal lesion in the right eye on a routine examination by his ophthalmologist. Fundus photographs were taken, and the patient was instructed to return in a year. He came back almost 2 years later with no new symptoms. Fundus examination and photographs were consistent with no change in the choroidal lesion, and he was told to return in another year. The patient was in another state on vacation several months later and was advised to see his son’s ophthalmologist when he complained about some loss of vision in the opposite eye. Examination revealed a branch vein occlusion in the left eye with mild macular edema and visual acuity of 20/50. The right eye had visual acuity of 20/30, and the original choroidal lesion was noted. Because the previous records were not available, echography was performed.

Visual Acuity Optic Disc Uveal Melanoma Fundus Examination Fundus Photograph
These keywords were added by machine and not by the authors. This process is experimental and the keywords may be updated as the learning algorithm improves.

This chapter contains video segments that can be found by accessing the following link: http://www.springerimages.com/videos/978-1-4614-7081-6.