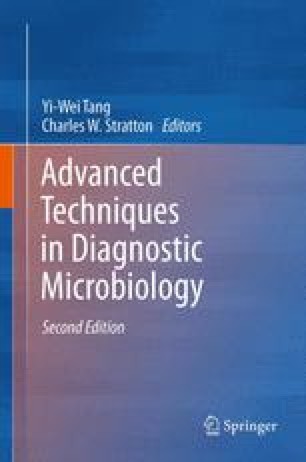 Technical and Clinical Niches for Point of Care Molecular Devices

A point of care (POC) device is one that is used outside of a central laboratory environment; generally near , or at the site of the patient/client. Point of care testing (POCT) varies from tests performed in physician’s office labs, or “satellite” or “stat” labs, to tests performed on tabletop instruments in a clinic area, to testing performed with hand-held instruments at the bedside. In peripheral lab settings, POCT may be performed by trained laboratory staff, but clinic and bedside POCT is frequently performed by staff who lack specialized laboratory training and whose primary job is something other than doing lab tests.

Bacterial Vaginosis Lamp Assay Yersinia Pestis Francisella Tularensis Gardnerella Vaginalis
These keywords were added by machine and not by the authors. This process is experimental and the keywords may be updated as the learning algorithm improves.
Download chapter PDF

Definition and Limitation of Point of Care Tests

A point of care (POC) device is one that is used outside of a central laboratory environment; generally near, or at the site of the patient/client. Point of care testing (POCT) varies from tests performed in physician’s office labs, or “satellite” or “stat” labs, to tests performed on tabletop instruments in a clinic area, to testing performed with hand-held instruments at the bedside. In peripheral lab settings, POCT may be performed by trained laboratory staff, but clinic and bedside POCT is frequently performed by staff who lack specialized laboratory training and whose primary job is something other than doing lab tests.

In the industrialized world POCT is most commonly used to provide results within medical decision-making or infection control intervention actionable timeframes in order to accelerate and streamline care. That timeframe differs depending on the nature and seriousness of the infectious process, but for purposes of this discussion, a maximum of 4 h may be a reasonable upper limit from sample collection to results delivery within the scope of a POC test. In some clinical situations, this will be too long, and clinical decisions must be made without test results for guidance. POCT is also used (especially in resource-limited settings) to provide laboratory results unavailable in any other way. This may be provided by simple test systems that use stable reagents and provide rapid results. Novel systems for remote testing (e.g., viewing of malaria smears via mobile phones) are also coming into use which might fit an operational definition of POCT [1].

There are several reasons to develop a POC test for an infectious disease. These include:

Clinical Situations for Which POC Molecular Tests Are Currently Available

Platforms employing molecular technology which are simple enough for potential POC use are just beginning to come to market. No molecular test has yet achieved CLIA “waived” status (although some are being developed for FDA submission), so POC molecular tests are still physician’s office lab or “satellite lab” tests rather than true bedside methods. Several comparatively simple, rapid molecular methods, though, are available and increasingly used.

The most widely used molecular test at patient POC sites is the real-time PCR (RT-PCR) assay for detection of nasal colonization of methicillin-resistant Staphylococcus aureus (MRSA) [2]. Colonized patients can be placed into contact isolation, decolonization protocols can be initiated, and appropriate surgical prophylaxis can be used [3]. The use of this assay within the United States Veterans’ Administration hospitals is one factor credited with lowering healthcare-associated MRSA infections 59 % since universal screening and additional infection control interventions were implemented. Selected nosocomial infections due to Clostridium difficile and vancomycin-resistant enterococci (VRE) also decreased [4]. Two further reports on the use of surveillance for MRSA illustrate the effectiveness of this intervention. With rapid results available within hours of patient admission, the Northshore Hospital System showed 69.6 % decrease in hospital-associated MRSA disease over the study period [5]. In contrast, another healthcare institution used a slower method for MRSA nasal surveillance with results available more than a day later and results were disappointing [6]. Molecular POC tools are virtually the only method possible to achieve the most effective infection control. Additional assays that detect both MRSA and methicillin-susceptible staphylococci in patients’ skin and soft tissue wound sites and in nares are also available [7].

Testing feces for the presence of toxigenic C. difficile is another use of rapid molecular technology today [8]. An RT-PCR platform and a loop-mediated isothermal amplification (LAMP) platform are FDA-cleared. They each employ different targets. The LAMP assay seeks a genetic locus in the TcdA gene of C. difficile whereas the PCR assays either identify a portion of the toxin B gene (TcdB) [9] or a second FDA-cleared assay presumptively identifies the epidemic, hypervirulent 027 strain by detecting both a binary toxin sequence and a deletion in the toxin regulatory gene, in addition to the TcdB gene [10, 11].

The same RT-PCR platform is FDA-cleared for detection of influenza A, B, and influenza A H1N1 novel 2009 in respiratory secretions, which is a modification of a previous test available for a limited time during the 2009 H1N1 Influenza A outbreak [12]. In addition, a self-contained PCR technology using packets of reagents in plastic pouches has also been FDA-cleared for detection of respiratory viruses [13]. Another rapid molecular test has been FDA-cleared for multiplex detection of 15 respiratory viruses, including adenovirus, 2 coronavirus strains, 5 influenza strains, human metapneumovirus, parainfluenza virus types 1–4, RSV, and rhino-enterovirus, with a time-to-result of 1–1.5 h using a novel multiplex PCR and array detection format [14]. Although other PCR methods for virus detection and identification in respiratory secretions are available and show excellent sensitivities and specificities, they are not candidates for POC tests due to their complexity, long performance time, or format that leads to inefficiencies when performing non-batch (such as stat) testing [14].

An FDA-cleared RT-PCR assay can be used to detect gastrointestinal colonization with VRE using rectal swabs [15]. The US version of the test was developed to detect the vanA gene only because vanB VREs are uncommon in the United States today, and because there are more vanB-containing non-enterococci than enterococci in feces. A commonly used FDA-cleared PCR platform has another enterococcal assay that detects vanA and vanB, but specificity of the vanB marker is poor and the format is not optimized for POC [16].

The same platform as described for VRE and staphylococci is FDA-cleared for direct detection of group B streptococci (GBS) in vaginal/rectal swabs [17]. This assay has been used at the time of delivery to test women who never received antenatal surveillance cultures for GBS, or for women who tested negative in their surveillance cultures but whose colonization status may have changed between the time of the culture and presentation in labor [18].

In addition, this platform has an FDA-cleared test for the presence of enterovirus in cerebrospinal fluid [19]. Unlike all the other tests available on this platform, the CSF enterovirus assay is designated “high complexity” due to the need for the testing person to pipette a specific 200 μL volume of CSF into the cartridge.

Lightcycler® and other RT-PCR platforms have been used to develop tests for herpes simplex and varicella zoster virus in cerebrospinal fluid. They could be considered borderline POC tests because if ordered stat, a highly trained laboratory scientist could theoretically perform the test and report results within the 4 h timeframe [20]. It is unlikely, however, that in cases of severe disease, the clinicians treating the patient would be willing to wait that long before treating based on clinical presentation and CSF cell count separate from microbiology laboratory results.

A direct DNA hybridization assay for identification of Gardnerella vaginalis (as a marker for bacterial vaginosis), Candida albicans, and Trichomonas vaginalis has been in use in large physician offices and reference laboratories for many years [21]. Tests can be run in batches of 6 or fewer samples and results are available within 2 h.

In countries other than the United States, the RT-PCR method is used to detect Mycobacterium tuberculosis and rifampin-resistance in M. tuberculosis using a hemi-nested PCR protocol that uses five molecular beacons to bind to different regions of the ribosomal polymerase B gene in which most mutations conferring rifampin resistance are found [22]. If all five regions bind to their specifically colored fluorescent beacons, the organism is a wild-type M. tuberculosis. If one or more of the regions fails to bind its specific beacon, but at least two regions are present, the M. tuberculosis strain is reported as resistant [23]. This test can be used with unprocessed respiratory tract secretions at the patient location and results are available within 2 h. Studies have shown that even unskilled workers can achieve high levels of accuracy with this assay [24]. After achieving endorsement by the World Health Organization, it is being broadly disseminated throughout the resource-poor world.

It should not be overlooked that there are several POC diagnostics for detection of agents of bioterrorism. Anthrax, Yersinia pestis, and Francisella tularensis are all easily weaponized agents, and tests have been developed and field tested for their detection in both the environment (e.g., powders) and in or on patients [25].

Clinical Situations for Which POC Tests Should Be Developed in Future

Several pathogens can be detected in patient samples using molecular tests within 4 h. However, there are formidable obstacles to moving molecular diagnostics into the POC setting. There include:

After these factors have been considered, the remaining current technologies include polymerase chain reaction, isothermal loop-mediated amplification, and direct DNA hybridization. Other methods are in earlier stages of development but may show potential in the future.

Molecular methods, when brought to routine POC use, have the potential to provide performance equivalent to that of laboratory-based methods. Methods must be chosen to have extreme sensitivity to detect small numbers of organisms in limited sample volumes, and further automation and miniaturization of platforms is desirable [28]. This is the situation in a number of infectious diseases; for example, tuberculous meningitis, where the paucibacillary nature of the cerebrospinal fluid has challenged the development of effective molecular assays [29].

Molecular methods at POC will bring new challenges to those who administer and perform POCT. In addition to the usual QA and QC associated with any POCT, molecular POCT will require procedures for controlling contamination with both amplified material and patient-derived materials. QC of each stage of the analytical procedure; extraction, amplification, and detection, may make trouble-shooting more challenging. The phenomenon of inhibited specimens may require operators to report more complex results than “positive” or “negative.” POC molecular instruments are likely to be more complex than current systems such as glucose testing systems and may, initially, lack some of the sophisticated POC management tools associated with traditional POC platforms [30].