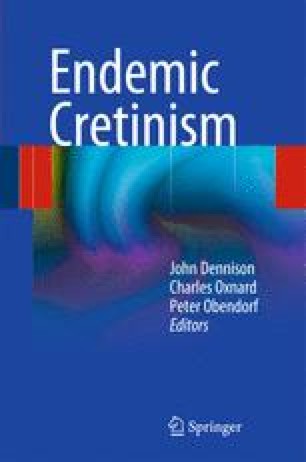 Etymology of the Word ‘Cretin’

Until quite recently a kind of uncertainty has predominated as to the origin and original meaning of the word ‘cretin’. It is acknowledged that it emerged only in the eighteenth century, and was mentioned for the first time in the French encyclopaedia of 1754. The word belongs among the dialects of south-eastern France.

By far the most likely derivation is from ‘Christianus’, from which the word ‘Cretin’ has evolved via ‘Crestin’. Salvioni states that 50 years earlier at Lake Maggiore the word ‘Christian’ was used to designate a cretin. The relationship with the word Chrétien is therefore at hand. The change in meaning has perhaps been brought about in such a way that the cretin was, to begin with, labelled as pauvre chrétien out of sympathy. According to another explanation, said to have come from Fodéré, the cretin, because of his limited intellect and harmlessness, might have appeared as bon chrétien, which would agree with the fact that in certain areas of the French Alps the cretins were also called beats or innocents. However, as Virchow has already pointed out, such references cannot be found in the original text of Fodéré’s work.

Public Health Internal Medicine Local Region Small Region Eighteenth Century
These keywords were added by machine and not by the authors. This process is experimental and the keywords may be updated as the learning algorithm improves.
This is a preview of subscription content, log in to check access.