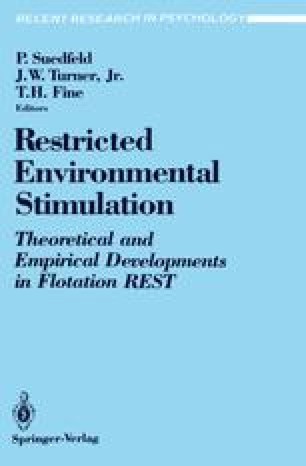 A total of 20 volunteers aged 18–22 who were of average height, truly right-handed, and in the preluteal stage of the menstrual cycle (days 5 through 12) were used as subjects in the study. Subjects were initially screened to establish the level of artifacts in the EEG patterns.

They were then tested for initial level of knowledge on a graded series of questions while EEG recordings were being made. Following controlled learning in the flotation tank (experimental group) or while relaxing on a couch (control group), final EEG recordings were made while the subjects were thinking about each of the questions in the series.

Within the statistical parameters stated, more learning occurred in subjects who had floated and were instructed while floating, than in subjects who lay quietly in a darkened room on a couch and were similarly instructed for the same period of time. In addition, the most pronounced increases in learning rates of floaters vs. controls were found in the more difficult questions. A visual inspection of raw EEG tracings revealed pattern changes which seemed to be consistent with gaining a higher level of understanding. These patterns were more pronounced in the floating group than in the non-floating control group.

An EEG recording during the chance moment in which a difficult technical concept suddenly “made sense” to a floating subject, showed an abrupt change in brain wave patterns.

When the floating group and the control group were divided into primarily visual vs. predominately conceptual thinkers, the amount of learning was greater for the visualizers.

Technical Question Cassette Tape Analog Tape Floating Group Brain Wave Pattern
These keywords were added by machine and not by the authors. This process is experimental and the keywords may be updated as the learning algorithm improves.
This is a preview of subscription content, log in to check access.