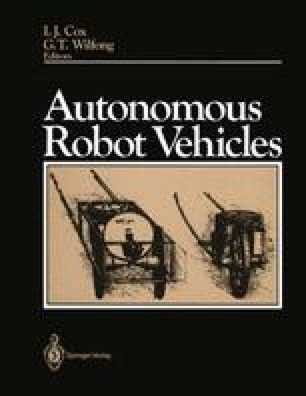 The Stanford Cart and the CMU Rover

The Stanford Cart was a remotely controlled TV-equipped mobile robot. A computer program was written which drove the Cart through cluttered spaces, gaining its knowledge of the world entirely from images broadcast by an on-board TV system. The CMU Rover is a more capable, and nearly operational, robot being built to develop and extend the Stanford work and to explore new directions.

The Cart used several kinds of stereopsis to locate objects around it in three dimensions and to deduce its own motion. It planned an obstacle-avoiding path to a desired destination on the basis of a model built with this information. The plan changed as the Cart perceived new obstacles on its journey.

The system was reliable for short runs, but slow. The Cart moved 1 m every 10 to 15 min, in lurches. After rolling a meter it stopped, took some pictures, and thought about them for a long time. Then it planned a new path, executed a little of it, and paused again. It successfully drove the Cart through several 20-m courses (each taking about 5 h) complex enough to necessitate three or four avoiding swerves; it failed in other trials in revealing ways.

The Rover system has been designed with maximum mechanical and control system flexibility to support a wide range of research in perception and control. It features an omnidirectional steering system, a dozen on-board processors for essential real-time tasks, and a large remote computer to be helped by a high-speed digitizing/data playback unit and a high-performance array processor. Distributed high-level control software similar in organization to the Hearsay II speech-understanding system and the beginnings of a vision library are being readied.

By analogy with the evolution of natural intelligence, we believe that incrementally solving the control and perception problems of an autonomous mobile mechanism is one of the best ways of arriving at general artificial intelligence.

Mobile Robot Path Planning World Model Array Processor Interest Operator
These keywords were added by machine and not by the authors. This process is experimental and the keywords may be updated as the learning algorithm improves.
This is a preview of subscription content, log in to check access.