Advances in Modelling, Animation and Rendering 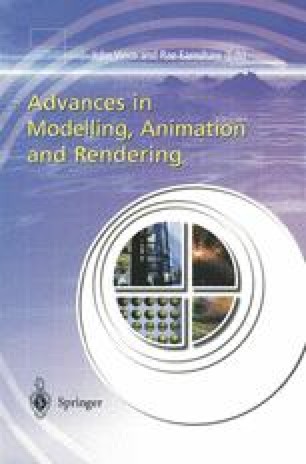 Advances in Modelling, Animation and Rendering pp 529-547 | Cite as

The emergence of digital television has seen an increase in the amount of available channels. The television industry faces the task of filling these schedules on stations that often broadcast for 24 hours a day. One resolution has been the use of archive material.

With the advent of interactive services, the audiences expectations of the delivery of programmes has increased, but the increased funding required for new services and programmes is becoming difficult.

Research has been developed to combine a cost-effective answer for the provision of programmes for digital channels whilst implementing the new emerging technologies.

We propose the development of an interactive environment, designed from archive material. This will push forward interactivity disseminated via broadcast, in allowing the user full navigation of the environment through 360 degrees, creating the experience of 3D viewing.

By using archive material we are able to reduce costs as the process introduces the re-purposing of an existing commodity, with the combination of a new technology. It is envisaged that the new environment can recreate a full archive programme or in the early stages of development, interactive scenes to supplement the material as broadcast