Understanding the Dynamics of Biological Systems 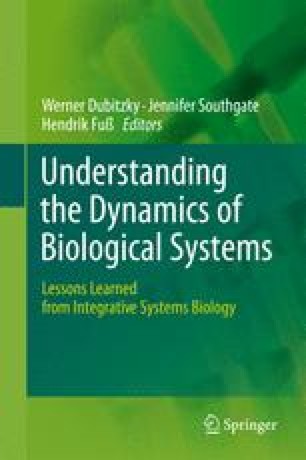 Understanding the Dynamics of Biological Systems pp 195-231 | Cite as

Systems biology aims at integrating processes at various time and spatial scales into a single and coherent formal description to allow analysis and computer simulation. In this context, we focus on rule-based modeling and its integration in the domain-specific language MGS. Through the notions of topological collections and transformations, MGS allows the modeling of biological processes at various levels of description. We validate our approach through the description of various models of a synthetic bacteria designed in the context of the International Genetically Engineered Machine Competition, from a very simple biochemical description of the process to an individual-based model on a Delaunay graph topology. This approach is a first step into providing the requirements for the emerging field of spatial systems biology which integrates spatial properties into systems biology.

Cellular Automaton Synthetic Biology Cellular Automaton Ordinary Differential Equation Germinal Cell
These keywords were added by machine and not by the authors. This process is experimental and the keywords may be updated as the learning algorithm improves.
This is a preview of subscription content, log in to check access.

The authors would like to thank the reviewers for their valuable comments on a first version of this chapter.

Further acknowledgments are also due to J. Cohen, B. Calvez, F. Thonnerieux, C. Kodrnja, and F. Letierce who have contributed in various ways to the MGSproject.

This research is supported in part by the the University of Évry, the University of Paris-Est, the CNRS, GENOPOLE-Évry, the Institute for Complex Systems in Paris-Ile de France, the ANR white project AutoChem and the French working group GDR GPL/LTP.