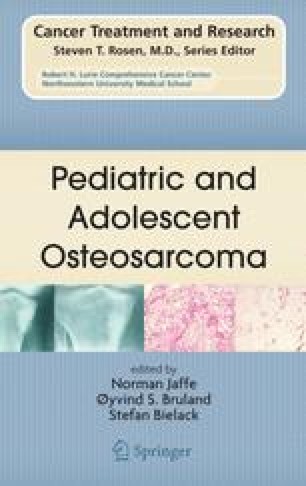 The Role of Radiotherapy in Oseosarcoma

A survey of the literature shows that the experience with radiotherapy (RT) in the local treatment of osteosarcoma (OS) is limited. This is due to various reasons: OS is a rare tumor and surgery is the treatment of choice with high local control rate, and uncertainty exists in regard to the efficacy and tolerance of radiotherapy. Publications on this topic were analyzed and will be reviewed. Furthermore, experience from the Cooperative Osteosarkomstudiengruppe (COSS)-Registry, including 100 patients (pts) treated using radiotherapy for OS, was analyzed.

The COSS-registry includes a total of 175 pts (5% of all pts) with histologically proven OS irradiated over the period of 1980−2007. 100 pts were eligible for analysis. The median age was 18 (3–66) years. Indication for RT was a primary tumor in 66, a local recurrence in 11, and metastases in 23 pts. 94 pts got external photontherapy; 2 pts, proton therapy; 2 pts, neutron therapy; and 2 pts, intraoperative RT. In addition, a group of 17 pts received bone-targeted radionuclide therapy by samarium-153-EDTMP-therapy alone or in combination with external RT. The median dose for external RT was 55.8 Gy (30–120). All the pts received chemotherapy in accordance with different COSS-protocols.

The median follow-up was 1.5 (0.2–23) years. Survival and local control rates at 5 years were calculated, and univariate and multivariate analyses performed. 41 pts are alive, 59 pts died. The overall survival rate after biopsy was 41% at 5 years, while the overall survival rates after RT for the whole group, for treatment of primary tumors, local recurrence, and metastases were 36%, 55%, 15%, and 0% respectively.

For the majority of pts, surgery remains the local treatment of choice. Radiotherapy is an important option as local treatment of unresectable tumors, following intralesional resection, or as palliation of symptomatic metastases. Survival prognosis of such pts, however, is poor. Despite the fact that many of these pts will eventually die, they may benefit in terms of prolonged survival and prolonged local control. The combination of surgery, radiotherapy, and chemotherapy can be curative. The consistent use of full-dose chemotherapy is of importance for the response to radiotherapy. Prognostic factors for survival are indication for RT, RT plus surgery vs. RT alone and tumor location. Prognostic factors for local control are indication for RT, and RT plus surgery vs. RT alone.

Local Recurrence Local Control Local Control Rate Proton Therapy Limb Salvage Procedure
These keywords were added by machine and not by the authors. This process is experimental and the keywords may be updated as the learning algorithm improves.
This is a preview of subscription content, log in to check access.