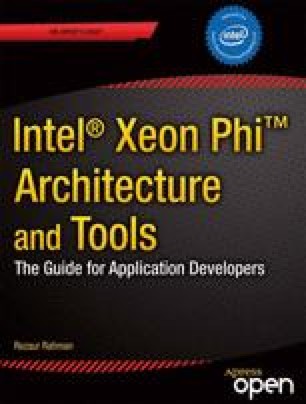 In the virtual shared memory programming model, the underlying middle layer of the compiler runtime maintains memory regions that map to the same virtual address space for both the host and the coprocessor. The programming language extension by Intel C++ compiler defines a keyword _Cilk_shared that you can use to declare variables that the runtime should place in the virtual shared memory region. You can also define functions with the same keyword to indicate that these functions will be available on both the host and the coprocessor.

A variable declared with the _Cilk_shared keyword is placed in the same virtual memory address in both the host and the coprocessor, such that the pointer values are the same between the physically disjoint address spaces but give the appearance of being in the same address space. Thus, the offload code can work on non-bitwise copyable data structures such as linked list data structures. The runtime synchronizes the variables between these disjointed address spaces automatically at offload call sites.

When a variable is declared as shared, the memory is allocated dynamically for the variable by the host in the host and coprocessor virtual address spaces region that both share. As the declaration must be visible at the host compile time because the host manages the allocation of the shared variable, the declaration of such variables cannot be conditionally controlled. That is, you cannot declare such variables as follows:

Incorrect code is generated here because during the host compile time the code generator does not see the variable declaration, as __MIC__ macro is undefined. As such, the compiler will not allocate the shared memory address space needed by the variable in the coprocessor space. When the coprocessor tries to access the variable, an illegal access error will occur.

When applied to a C++ class, all of its member functions and all of the objects of that class are shared between the host and the coprocessor. You can apply the keyword to static fields of a class, assigning pointer-to-shared variables to pointer-to-nonshared variables. Other valid rules are assigning the address of a shared variable to a shared pointer. However, you cannot use _Cilk_shared on the field of a structure, on a static variable, or on variables local to a function.

For dynamic memory allocation in the virtual shared region, the compiler provides the following functions:

You can call these functions from host code to be offloaded to the coprocessor by using the _Cilk_offload keyword:

Some of the rules for using _Cilk_offload functions are as follows:

A _Cilk_offload before a _Cilk_for loop specifies that the entire loop is to be executed on the coprocessor. The syntax for using _Cilk_offload is as follows:

lvalue is an object assigned the return value of the offload function call.

func is a function name to be offloaded.

target-number is a signed integer value having following interpretations:

init-expr, test-expr, and incr-expr are initialization, test, and increment expressions, respectively, for the for loop expression that will be offloaded to the coprocessor for execution.

Additional examples of virtual shared memory usage can be found under compiler-install-dir/Samples/en_US/C++/mic_samples/LEO_tutorial.

Synchronizing Between the Host and the Coprocessors

Memory synchronization for shared memory variables between the host and the coprocessor happens at the following points only:

Any simultaneous access between the host and the coprocessor outside these synchronization points will result in a race condition, and the value of the shared variables will be undefined.

It is possible for multiple host threads to execute concurrently on the host, and for one or more host threads to offload computation to the coprocessor. In this case, you cannot synchronize between the offloaded code and other threads running on the host through thread synchronization mechanisms, such as mutexes and atomics. However, if the host uses OpenMP parallelism and one or more of the OpenMP threads perform offload, the OpenMP synchronization at the end of the OpenMP parallel region is guaranteed to work. An exception cannot be generated in the coprocessor to be caught and handled on the host.

Open Access This chapter is licensed under the terms of the Creative Commons Attribution-NonCommercial-NoDerivatives 4.0 International License (http://creativecommons.org/licenses/by-nc-nd/4.0/), which permits any noncommercial use, sharing, distribution and reproduction in any medium or format, as long as you give appropriate credit to the original author(s) and the source, provide a link to the Creative Commons licence and indicate if you modified the licensed material. You do not have permission under this licence to share adapted material derived from this chapter or parts of it.

The images or other third party material in this chapter are included in the chapter’s Creative Commons licence, unless indicated otherwise in a credit line to the material. If material is not included in the chapter’s Creative Commons licence and your intended use is not permitted by statutory regulation or exceeds the permitted use, you will need to obtain permission directly from the copyright holder.