The Politics of Adoption 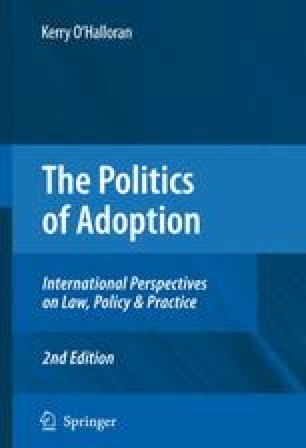 The Adoption Process in Ireland

In Ireland the law of adoption, now consisting of seven pieces of legislation,1 has provided the legal framework for a practice that has seen 42,000 children adopted2 since the Adoption Act 1952 first introduced a legal means for making this possible. As elsewhere, this period has seen a steady annual decline in domestic adoption orders—from 1,115 in 1980 down to 222 in 2006. It has also been a period in which there has been an uncoupling of the traditional association between unmarried mothers and adoption as the latter has gradually ceased to be used almost exclusively as a means of regulating the non-kinship placements of voluntarily relinquished illegitimate babies. Instead it is increasingly becoming a means of sanctioning the private family arrangements of birth parents, almost always mothers, in respect of their own children. Adoption as a public child care resource, legislatively expedited elsewhere, is not encouraged by government policy in this jurisdiction which partially explains the steady and significant increase in intercountry adoptions.

This chapter begins with a brief history of the adoption process in Ireland and an account of the main influences that have combined to shape its current social role. This leads into an overview of contemporary law, policy and practice including a guide to the outcome of the recent adoption law review process.

Foster Parent Adoption Process Hague Convention Birth Parent Unmarried Mother
These keywords were added by machine and not by the authors. This process is experimental and the keywords may be updated as the learning algorithm improves.
This is a preview of subscription content, log in to check access.