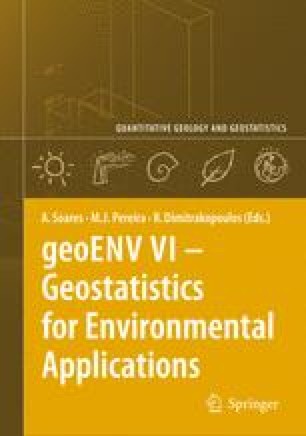 Joint Simulation of Mine Spoil Uncertainty for Rehabilitation Decision Making

Soil attributes, including those in mine spoil heaps, critically affect plant growth during land rehabilitation. Their characterization through a limited number of samples requires quantification of spatial variability, which is then used at various stages throughout the rehabilitation process and assists risk analysis and rehabilitation decision making. Stochastic simulation is a tool used for the quantification of uncertainty. This paper presents the suitability of stochastic simulation for the joint simulation of soil attributes and a computationally efficient method based on: (i) the Minimum/Maximum Autocorrelation Factors (MAF), involving the de-correlation of pertinent variables into spatially non-correlated factors, and (ii) the simulation of MAF and back transformation to the conditional simulations of the correlated variables. MAF factors in point (ii) are simulated using the new generalized sequential Gaussian simulation technique which is substantially more efficient than the traditional sequential simulation methods. The formulated approach is applied to mine spoil data, specifically electrical conductivity and pH, which typically contribute to restricted plant growth on spoils in coal mines. The results of the simulations are used to quantify the risk of exceeding significant thresholds for each variable, thereby identifying problem rehabilitation areas. The case study demonstrates the practical aspects of the method, as well as its use in planning rehabilitation strategies and predictions of future performance of the rehabilitation.

Waste Dump Mine Spoil Conditional Simulation Math Geol Sequential Gaussian Simulation
These keywords were added by machine and not by the authors. This process is experimental and the keywords may be updated as the learning algorithm improves.
This is a preview of subscription content, log in to check access.