Cost-Sharing and Accessibility in Higher Education: A Fairer Deal? 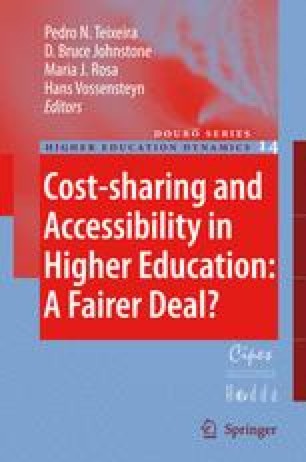 Cost-Sharing and Accessibility in Higher Education: A Fairer Deal? pp 51-77 | Cite as

In 1985, I was granted a three-month sabbatical: a reward for having survived five financially challenging and sometimes stressful years as president of the largest comprehensive college in the State University of New York system. More than a little of the stress had stemmed from my incessant sparring with the governor and the New York State Legislature over whether tuition fees — then approximately 15 per cent of the underlying costs of instruction, but generously means-tested so that low income families were spared virtually any out-of-pocket tuition-related expenses — should rise as our underlying institutional costs rose. The source of our rising per-student costs, as is the case in higher educational institutions everywhere, was almost entirely due to increases in faculty and staff compensation, which in the State University of New York was negotiated exclusively by the governor of the state rather than by the presidents of the system's colleges and universities or even by our State University of New York system trustees. But the governor — in this instance supported politically by most of the New York State Legislature — refused to countenance even the modest increase that would have maintained our already low (by US standards) tuition fees at a constant percentage share of these increasing costs (for which the governor, in effect, was mainly responsible). Furthermore, neither the governor nor the state legislature had any intention of increasing the state taxpayer's contribution by enough even to maintain the state's current ‘share’ of these underlying cost increases — much less by enough to make up for that part of the parent/student share that was now missing due to their refusal to increase tuition fees.

Price Discount Student Loan Living Expense High Education Contribution Scheme Governmental Subsidy
These keywords were added by machine and not by the authors. This process is experimental and the keywords may be updated as the learning algorithm improves.
This is a preview of subscription content, log in to check access.