Remembering for the Future 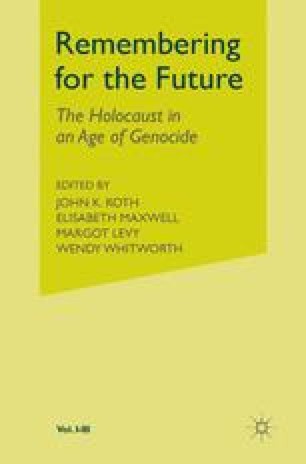 On the Jews and the Lutherans

Ever since the Confessing Church in Germany issued the Barmen Declaration in 1934, Lutherans, both European and American, have struggled with issues surrounding the role of the church during the rise of Nazism and World War II. Most recently, here in the United States, this struggle led in 1994 to the official condemnation by the Evangelical Lutheran Church in America1 of Luther’s 1543 anti-Semitic pamphlet. Continuing along the path of repentance and reconciliation, the ELCA in April 1998 issued the draft of a document on Lutheran-Jewish relations, requesting comment from academics and clergy associated with the church. A final version was adopted on 16 November 1998.

Jewish Community Jewish People Protestant Church Official Condemnation Biblical Interpretation
These keywords were added by machine and not by the authors. This process is experimental and the keywords may be updated as the learning algorithm improves.
This is a preview of subscription content, log in to check access.