The Beatles, Popular Music and Society 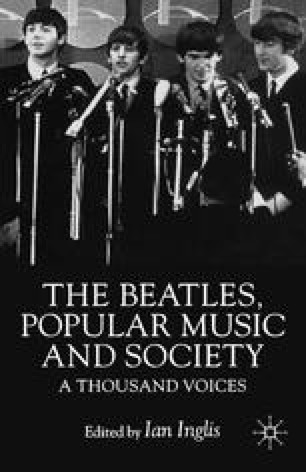 The Beatles, Popular Music and Society pp 35-52 | Cite as

The Beatles and the Spectacle of Youth

The Beatles have long been viewed as one of the key icons — perhaps the key icon — of the 1960s. Between the release of ‘Love Me Do’ in 1962 and their disbanding in 1970, they produced more than 200 songs and sold more than 200 million records. Their early appearances provoked unprecedented scenes of mass hysteria. The group whose popularity was to be variously gauged as greater than that of Elvis Presley or Jesus Christ are widely acclaimed as one of the most significant forces in the history of popular music, as being a symbol for teenagers worldwide and for revolutionizing British pop culture. Thirty years on, we routinely find their albums appearing in lists of the greatest records of all time (usually Revolver, Abbey Road and Sgt Pepper’s Lonely Hearts Club Band), and they are widely regarded as a key reference point for the emergence of Britpop in the mid-1990s.

Popular Music Youth Culture Musical Style Lysergic Acid Diethylamide Rolling Stone
These keywords were added by machine and not by the authors. This process is experimental and the keywords may be updated as the learning algorithm improves.

I wish to thank Andy Simpson, Gordon Hughes and Eugene McLaughlin for their comments on an earlier draft of this chapter.

John Lennon: Nothing happened, except that we grew up; we did our thing just like they were telling us … we’re a minority, you know, people like us always were, but maybe we are a slightly larger minority because of something or other. (Wenner 1973: 12)

Cite this chapter as:
Muncie J. (2000) The Beatles and the Spectacle of Youth. In: Inglis I. (eds) The Beatles, Popular Music and Society. Palgrave Macmillan, London