The Role of Migration in the History of the Eurasian Steppe 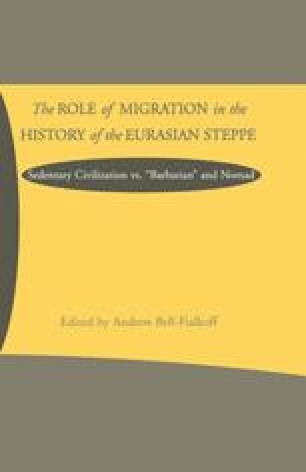 The Mongolian Impact on Eurasia: A Reassessment

According to a recent popular book on the Mongols, “The storm that swept across the world during the thirteenth century changed the political boundaries of Asia and Europe, uprooted entire peoples and dispersed them across the continent. It transformed the ethnic character of many regions, while at the same time permanently changing the strength and influence of the three major religions: Islam, Buddhism and Christianity” (Marshall 1993, 15–16).1 These two sentences sum up the received wisdom on the Mongolian impact on world history. From the European vantage point, an unknown group of nomads appeared from the East and radically changed the face of Eurasian history before disappearing again. One could further argue, and indeed people have, that ultimately the Mongol impact extended to the entire world, including parts unknown in the thirteenth century. Authors on the Mongols are often fond of pointing out that Christopher Columbus set out on his voyages spurred in part by tales of the wealth of the court of the Great (Mongol) Khan reported by Marco Polo (e.g., Marshall 1993, 236; Morgan 1986, 198).

Thirteenth Century Fourteenth Century Trade Route Sedentary Population Receive Wisdom
These keywords were added by machine and not by the authors. This process is experimental and the keywords may be updated as the learning algorithm improves.
This is a preview of subscription content, log in to check access.