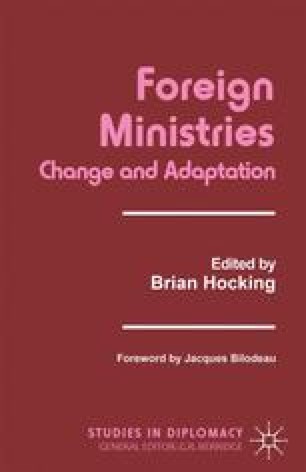 Chapter
Part of the Studies in Diplomacy book series

Given the fact that the foreign ministry has come to be viewed from several perspectives as being in a state of relative decline, a book devoted to it might be regarded as a strange enterprise. There are, however, several reasons why this is not so. Firstly, despite arguments which suggest that fundamental changes in the nature of the international and domestic environments within which governments conduct their foreign policies have undermined the rationale of a department devoted to ‘international’ issues, foreign ministries are still a significant part of the bureaucratic landscape. Certainly, they confront increasing pressures, not least those imposed by resource constraints, but many of these are shared by most agencies of government and should not, of themselves, be regarded as an indicator of decline. The fact that foreign ministries continue to exist, then, in what is often assumed to be a hostile environment, of itself invites an examination of their responses to change and the roles that they are performing

European Union Foreign Policy Foreign Affair International Policy Foreign Ministry
These keywords were added by machine and not by the authors. This process is experimental and the keywords may be updated as the learning algorithm improves.
This is a preview of subscription content, log in to check access.