The Politics of Expertise in Latin America 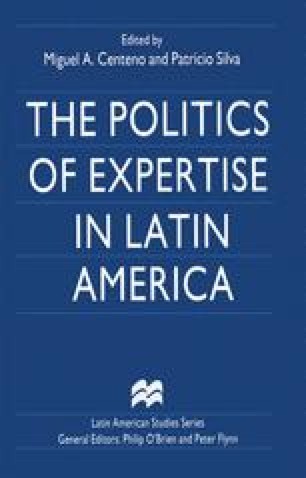 Technocracy a la Mexicana:Antecedent to Democracy?

Any discussion of technocracy and technocrats in the Latin American context these days must face head-on the ambiguities and contradictions inherent in their conceptualization. Because social scientists and policymakers are those most interested in these decisionmakers, a strong tendency exists to suggest that these individuals emerged Phoenix-like from the region’s disastrous economic and political crises of the 1980s. Yet, depending on how one characterizes this political type, a long-standing historical antecedent of the técnico can be found in Mexico and, I suspect, throughout Latin America. Technocrats also have roots in other cultures, such as the mandarins in ancient China, and are subsumed under the larger issue of the rapid expansion of knowledge workers, particularly the intelligentsia, in nineteenth- and early twentieth-century Europe (Bruce-Briggs, 1979).

Political Elite Executive Branch Political Skill Political Career Mexican Case
These keywords were added by machine and not by the authors. This process is experimental and the keywords may be updated as the learning algorithm improves.
This is a preview of subscription content, log in to check access.