Elections before Democracy: The History of Elections in Europe and Latin America 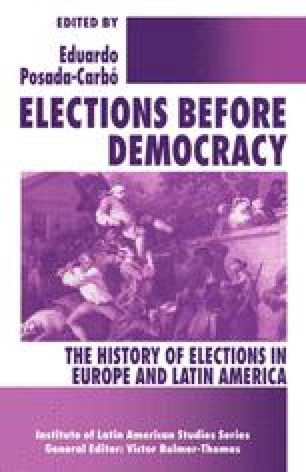 Elections before Democracy: The History of Elections in Europe and Latin America pp 87-115 | Cite as

Ecuador became an independent nation in 1830. Its first constitution declared that its government would be: ‘popular, representative, alternative and accountable’.1 It was only in 1978, however, that the seventeenth constitution of the country abolished the literacy requirement, thus permitting the bulk of the Ecuadorean population to elect governments which were, in principle at least, truly popular, representative, alternative and accountable. In the century and a half that elapsed between these two dates, there took place a struggle between those who wanted to restrict the system of representation in one way or another and those who worked to expand it. Of the many clashes perhaps the most interesting and decisive of all was that which took place in 1861. Very little however has been written on the subject and that which exists is in need of revision.2

Political Participation Proportional Representation Equal Representation Territorial Unit National Convention
These keywords were added by machine and not by the authors. This process is experimental and the keywords may be updated as the learning algorithm improves.
This is a preview of subscription content, log in to check access.

Cite this chapter as:
Maiguashca J. (1996) The Electoral Reforms of 1861 in Ecuador and the Rise of a New Political Order. In: Posada-Carbó E. (eds) Elections before Democracy: The History of Elections in Europe and Latin America. Institute of Latin American Studies Series. Palgrave Macmillan, London. https://doi.org/10.1007/978-1-349-24505-5_5