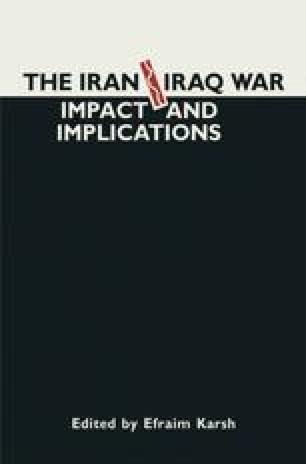 The Gulf States and the Iran-Iraq War

The Gulf Arab monarchies have been, simultaneously, the front-row observers, financiers, victims, prizes, and would-be mediators of the Iran-Iraq war. Simply to inventory the threats posed by the conflicts for these states — Saudi Arabia, Kuwait, the United Arab Emirates (UAE), Qatar, Bahrain, and Oman — reveals the intensity and variety of dangers. Their ability to handle this situation was sharply limited by a lack of power.

Saudi Arabia United Arab Emirate Foreign Minister Islamic Republic Gulf State
These keywords were added by machine and not by the authors. This process is experimental and the keywords may be updated as the learning algorithm improves.
This is a preview of subscription content, log in to check access.