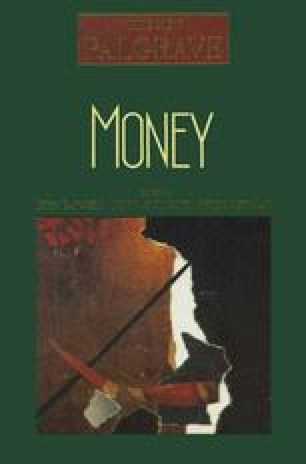 Chapter
Part of the The New Palgrave book series (NPA)

The term money illusion is commonly used to describe any failure to distinguish monetary from real magnitudes. It seems to have been coined by Irving Fisher, who defined it as ‘failure to perceive that the dollar, or any other unit of money, expands or shrinks in value’ (1928, p. 4). To Fisher, money illusion was an important factor in business-cycle fluctuations. Rising prices during the upswing would stimulate investment demand and induce business firms to increase their borrowing, thus causing a rise in the nominal rate of interest. Lenders would accommodate them by increasing their savings in response to the rise in the nominal rate, not taking into account that, because of the rise in inflation, the real rate of interest had not risen but had actually fallen (Fisher, 1922, esp. ch. 4).

Monetary Policy Demand Function Nominal Wage Phillips Curve Nominal Rate
These keywords were added by machine and not by the authors. This process is experimental and the keywords may be updated as the learning algorithm improves.
This is a preview of subscription content, log in to check access.