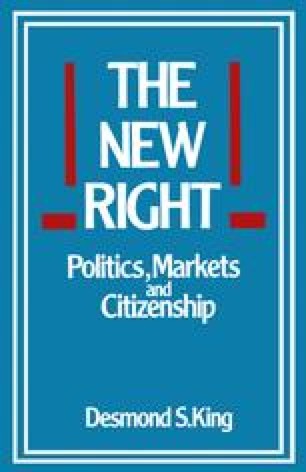 The New Right Politics, Markets and Citizenship pp 49-69 | Cite as

The Decline of the Keynesian Welfare State Consensus

This chapter sketches the historical and political background to New Right theories. This means examining the ‘post-war consensus’ or settlement in Britain, manifested in the adoption of Keynesian economic principles combined with a commitment to the welfare state. In the United States similar policies can be observed also (notably the post-1963 Keynesian policies and the expansion of the state’s commitment to welfare services), though in a less developed form. This chapter also highlights some of the political differences between the United States and Britain.