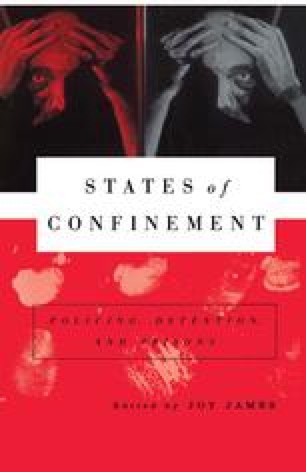 The story of policing, detention, and prisons is simultaneously a story of racial and gendered violence. In other words, any discussion of state violence must be viewed within the broader discussion of violence against racial and national minorities, women of color, gays, and lesbians. Yet this is also the age of the neoliberal or neoconservative consensus—a time when bipartisanship shamelessly insists that “there is no racism.” (With some regional variation, similar claims are made in reference to gender and sexual discrimination.) Indeed, when today the United States looks for explanations for its tripling prison population, the exponential increase in concentrations of inner city poverty, the hypermilitarization of metropolitan police forces, and the collapse of the welfare state, the public is quickly introduced to a litany of seemingly raceless phrases and terms that it must learn to recite: the “dysfunctional family,” a “culture of poverty,” and, of course, the “underclass.” The underclass is a particular favorite of liberal social scientists and policymakers. A decep- tively simple term, it suggests that racism is no longer to blame for social inequities; the real culprits are the individual pathologies, behaviors, and cultures of those who live at the bottom. Racism is out, taking “personal responsibility” is in.