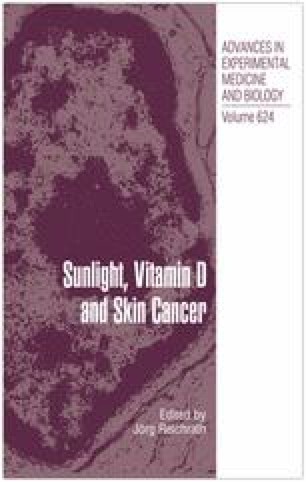 At What Time Should One Go Out in the Sun?

To get an optimal vitamin D supplement from the sun at a minimal risk of getting cutaneous malignant melanoma (CMM), the best time of sun exposure is noon. Thus, common health recommendations given by authorities in many countries, that sun exposure should be avoided for three to five hours around noon and postponed to the afternoon, may be wrong and may even promote CMM. The reasons for this are (1) The action spectrum for CMM is likely to be centered at longer wavelengths (UVA, ultraviolet A, 320–400 nm) than that of vitamin D generation (UVB, ultraviolet B, 280–320 nm). (2) Scattering of solar radiation on clear days is caused by small scattering elements, Rayleigh dominated and increases with decreasing wavelengths. A larger fraction of UVA than of UVB comes directly and unscattered from the sun. (3) The human body can be more realistically represented by a vertical cylinder than by a horizontal, planar surface, as done in almost all calculations in the literature. With the cylinder model, high UVA fluence rates last about twice as long after noon as high UVB fluence rates do.

Skin Cancer Cutaneous Malignant Melanoma Action Spectrum Fluence Rate Vertical Cylinder
These keywords were added by machine and not by the authors. This process is experimental and the keywords may be updated as the learning algorithm improves.
This is a preview of subscription content, log in to check access.