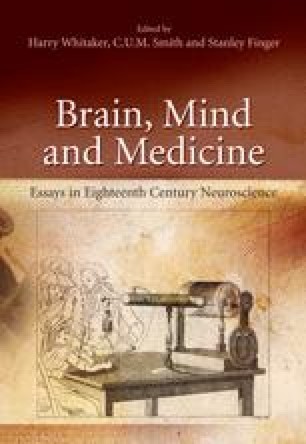 Hysteria in the Eighteenth Century

In her study “Hysteria: The history of a disease” (1965) Ilza Veith referred to the eighteenth century as “controversial.” It was indeed controversial in that there were competing and changing theories of the nature of hysteria. These depended upon the scientific discoveries and changing theories that influenced medical thought. However, the term “hysteria,” while convenient for the historian, did not reflect the most common usage during the seventeenth and eighteenth centuries.

The term “hysteria” has as its etymology the Greek and Latin term for the womb. However, the Greek physician, Galen (c. AD130–c. 200) noted that “hysterical passion is just one name; varied and innumerable, however, are the forms which it encompasses” (cited in Veith, 1965, p. 39). Indeed, physicians and laymen alike in the seventeenth and eighteenth centuries described the extraordinary behaviors that they witnessed as fits, suffocation of the mother, spleen, vapors, hysteric distemper, nerves, etc. As late as 1788, William Rowley (1742–1806) gave the following title to his work “A Treatise on female, nervous, hysterical, hypochondriacal, bilious, convulsive Diseases …” Thus the term “hysteria” raises problems. As Hunter and McAlpine (1963, p. 288) point out, “The concept of ‘Vapours’ or ‘Hysterick Fits’ which was popular in the later seventeenth and eighteenth centuries illustrates one of the pitfalls of tracing the history of mental illness down the centuries by terminology.” The historian’s difficult task is to find the underlying meanings and theories that underpin the medical language and also to examine and describe some of the different medical practices and therapeutics.

The confusion of ideas, theory, and medical practice during the late-seventeenth and eighteenth centuries coincided with the end to witch hunts, which often involved women who displayed hysteric-like behavior or other signs of mental disturbance. These women had been thought to be possessed by the devil by their inquisitors, sometimes armed with the “Malleus Maleficarum” as a guide.

The changing outlook stemmed from individuals such as Edward Jorden (1578–1632), who became involved in the trial of a woman accused of having put a spell on a 14-year-old girl. In his defence of the “witch,” Jorden argued that the child was suffering from a natural disorder of the mind and behavior. Still, the court found the woman guilty of witchcraft. In 1603, Jorden wrote a treatise to acquaint the medical profession above all, with those behaviors that should be considered clinical signs and not the work of the devil. Thus, new explanations and theories for certain aberrant behaviors began to take hold in the seventeenth century.

Eighteenth Century Seventeenth Century Nosological System Digestive Problem Menstrual Problem
These keywords were added by machine and not by the authors. This process is experimental and the keywords may be updated as the learning algorithm improves.
This is a preview of subscription content, log in to check access.